I WONDER AS I WANDER, by Hughes 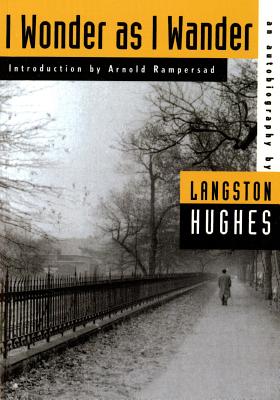 I Wonder as I Wander: An Autobiographical Journey (Paperback)

In I Wonder as I Wander, Langston Hughes vividly recalls the most dramatic and intimate moments of his life in the turbulent 1930s.

His wanderlust leads him to Cuba, Haiti, Russia, Soviet Central Asia, Japan, Spain (during its Civil War), through dictatorships, wars, revolutions. He meets and brings to life the famous and the humble, from Arthur Koestler to Emma, the Black Mammy of Moscow. It is the continuously amusing, wise revelation of an American writer journeying around the often strange and always exciting world he loves.

Langston Hughes (1902-67) was born in Joplin, Missouri, was educated at Lincoln University, and lived for most of his life in New York City. He is best known as a poet, but he also wrote novels, biography, history, plays, and children's books. Among his works are two volumes of memoirs, The Big Sea and I Wonder as I Wander, and two collections of Simple stories, The Best of Simple and The Return of Simple.

“The Big Sea and I Wonder as I Wander are among the wisest, warmest and most informative books to issue from Langston's pen, and by that to say from the Renaissance or any other literary movement.” —Amiri Baraka