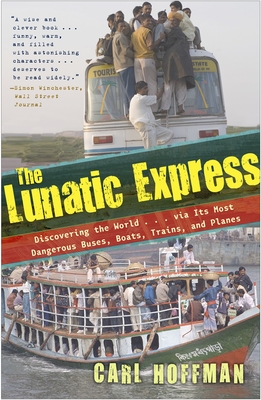 The Lunatic Express: Discovering the World . . . via Its Most Dangerous Buses, Boats, Trains, and Planes (Paperback)

Whenever he picked up the newspaper, Carl Hoffman noticed those short news bulletins, which seemed about as far from the idea of tourism, travel as the pursuit of pleasure, as it was possible to get. So off he went, spending six months circumnavigating the globe on the world's worst conveyances: the statistically most dangerous airlines, the most crowded and dangerous ferries, the slowest buses, and the most rickety trains. The Lunatic Express takes us into the heart of the world, to some its most teeming cities and remotest places: from Havana to Bogotá on the perilous Cuban Airways. Lima to the Amazon on crowded night buses where the road is a washed-out track. Across Indonesia and Bangladesh by overcrowded ferries that kill 1,000 passengers a year. On commuter trains in Mumbai so crowded that dozens perish daily, across Afghanistan as the Taliban closes in, and, scariest of all, Los Angeles to Washington, D.C., by Greyhound.

The Lunatic Express is the story of traveling with seatmates and deckmates who have left home without American Express cards on conveyances that don't take Visa, and seldom take you anywhere you'd want to go. But it's also the story of traveling as it used to be—a sometimes harrowing trial, of finding adventure in a modern, rapidly urbanizing world and the generosity of poor strangers, from ear cleaners to urban bus drivers to itinerant roughnecks, who make up most of the world's population. More than just an adventure story, The Lunatic Express is a funny, harrowing and insightful look at the world as it is, a planet full of hundreds of millions of people, mostly poor, on the move and seeking their fortunes.

Carl Hoffman has driven the Baja 1000, ridden reindeer in Siberia, sailed an open dinghy 250 miles, and traveled to 65 countries.  When he's able to stay put for more than a few months at a time, he lives in Washington, D.C., where his three children make fun of him on a pretty constant basis. He is a contributing editor at National Geographic Traveler and Wired magazines, and his stories about travel and technology also appear in Outside, National Geographic Adventure, Men's Journal and Popular Mechanics.
“This book is fabulous. The lean description, the weave of old and new perspective, the personalities, the real-people wisdom, and that the danger is as real as we don't want to think it is.  The Lunatic Express is refreshing, liberating, and a paean to true Travel.  Hoffman opened my eyes to the off-the-grid traveler, clearly most of the world, and made me cry. The last pages struck home; the duality of escape and harbor are the blessing and curse of life.” -- Keith Bellows, Editor-in-Chief of National Geographic Traveler


“Reinvented the travel log as the supreme theater of paradox…a search for an unholy grail—something freakish; something dangerous; something authentic… Take this ride.” -Richard Bangs, Producer/Host of the Public Television series, Adventures with Purpose

"There are two possibilities: we move through the world, or the world moves through us. Carl Hoffman's clever, funny, fearsome book does both. It takes us into the frantic fear and pitiless extinctions that punctuate the simple struggle to get from home to anywhere, for so many of the world's people. But it also takes us into the heart of the writer: and that journey, with its beauty and compassion, its conscience and courage, is so thrilling that we hope the ride never ends." -- Gregory David Roberts, author of SHANTARAM

“Carl Hoffman, a courageous and interestingly untroubled man from Washington, D.C., has done a great service by reminding us, in The Lunatic Express, of this abiding truism: that the world’s ordinary traveler is compelled to endure all too much while undertaking the grim necessities of modern movement…Mr. Hoffman spent a fascinating year going around the world precisely as most of the world's plainest people do—not on JetBlue or United or American or Trailways, modes of transport that look positively heavenly by comparison, but in the threadbare conveyances of the planet's billions….He learns along the way a great deal about the habits of the world's peripatetic poor, and he writes about both the process and the people with verve and charity, making this book both extraordinary and extraordinarily valuable….It is a wise and clever book too, funny, warm and filled with astonishing characters. But it also represents an important exercise, casting an Argus-eye on a largely invisible but un-ignorable world. It is thus a book that deserves to be read widely. Perhaps in some airport in a blinding rainstorm in the Midwest, while waiting for yet another infernally delayed American plane.” – Simon Winchester, Wall Street Journal