NOTHING IS TRUE AND EVERYTHING IS POSSIBLE, by Pomerantsev 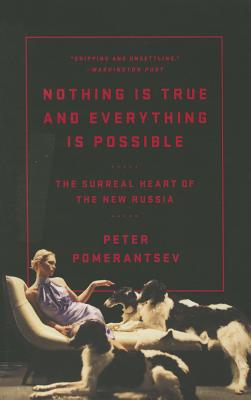 Nothing Is True and Everything Is Possible: The Surreal Heart of the New Russia (Paperback)


Not On Our Shelves—Ships in 1-5 Days
A journey into the glittering, surreal heart of 21st century Russia, where even dictatorship is a reality show

Professional killers with the souls of artists, would-be theater directors turned Kremlin puppet-masters, suicidal supermodels, Hell's Angels who hallucinate themselves as holy warriors, and oligarch revolutionaries: welcome to the wild and bizarre heart of twenty-first-century Russia. It is a world erupting with new money and new power, changing so fast it breaks all sense of reality, home to a form of dictatorship-far subtler than twentieth-century strains-that is rapidly rising to challenge the West.

When British producer Peter Pomerantsev plunges into the booming Russian TV industry, he gains access to every nook and corrupt cranny of the country. He is brought to smoky rooms for meetings with propaganda gurus running the nerve-center of the Russian media machine, and visits Siberian mafia-towns and the salons of the international super-rich in London and the US. As the Putin regime becomes more aggressive, Pomerantsev finds himself drawn further into the system.

Dazzling yet piercingly insightful, Nothing Is True and Everything Is Possible is an unforgettable voyage into a country spinning from decadence into madness.
Peter Pomerantsev is a Visiting Senior Fellow at the Institute of Global Affairs at the London School of Economics, an author and TV producer. He studies propaganda and media development, and has testified on the challenges of information war to the US House Foreign Affairs Committee, US Senate Foreign Relations Committee and the UK Parliament Defense Select Committee. He writes for publications including Granta, the Atlantic, Financial Times, London Review of Books, Politico, and many others. His first book, Nothing is True and Everything is Possible, won the 2016 Royal Society of Literature Ondaatje Prize, was nominated for the Samuel Johnson, Guardian First Book, Pushkin House and Gordon Burns Prizes. It is translated into over a dozen languages.
Shortlisted for the 2015 Guardian First Book Award
Longlisted for the 2015 Samuel Johnson Prize
An Amazon.com Best Book of the Month, November 2014

"A scintillating take on a twisted reality."—Prospect Magazine

"A patchwork tapestry that leaves you shaking your head in disbelief."—The Guardian

"Everything you know about Russia is wrong, according to this eye-opening, mind-bending memoir of a TV producer caught between two cultures... the stylish rendering of the Russian culture, which both attracts and appalls the author, will keep the reader captivated."—Kirkus, Starred Review

"Sometimes horrifying but always compelling, this book exposes the bizarre reality hiding beneath the facade of a 'youthful, bouncy, glossy country.'"—Publishers Weekly

"It is hard to think of another work that better describes today's Russia; Nothing Is True and Everything Is Possible may very well be the defining book about the Putin era. This might seem like excessive praise for a relatively short, non-academic memoir by a reality-TV producer now living in London, but it is justified by the author's gimlet eye and reportorial skill."—Commentary Magazine

"A brilliant, entertaining, and ultimately tragic book about not only Russia, but the West."—Tablet Magazine

"[A] tale of descending into and eventually emerging from Moscow's hallucinogenic reality."—Foreign Affairs

"[A] riveting, urgent book ... Pomerantsev is one of the most perceptive, imaginative and entertaining commentators writing on Russia today and, much like the country itself, his first book is seductive and terrifying in equal measure."—The Times (UK)

"This is the strangest book of note I have ever read... a dark and grotesque comedy of manners... His reporter's straightforward and unlimited curiosity, his willingness to plow and harrow the widest fields for facts, and his exacting descriptive details give him credibility. Plus, what he tells us is so incredible."
—P.J. O'Rourke, World Affairs Magazine

"A riveting portrait of the new Russia with all its corruption, willful power and spasms of unforgettable, poetic glamor. I couldn't put it down."—Tina Brown

"Peter Pomeranzev, one of the most brilliant observers of Putin's Russia, describes a country obsessed with illusion and glamor, but with a dangerous, amoral core beneath the surface. Nothing is True and Everything is Possible is an electrifying, terrifying book."—Anne Applebaum, author of Gulag and Iron Curtain, winner of the Pulitzer Prize for Nonfiction