THE ONLY STREET IN PARIS, by Sciolino 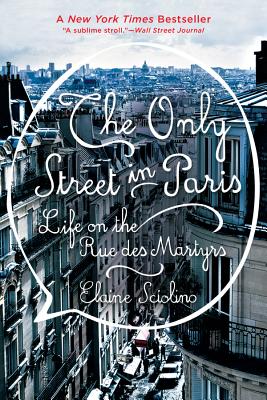 The Only Street in Paris: Life on the Rue des Martyrs (Paperback)

"Sciolino’s sharply observed account serves as a testament to…Paris—the city of light, of literature, of life itself." —The New Yorker

Elaine Sciolino, the former Paris Bureau Chief of the New York Times, invites us on a tour of her favorite Parisian street, offering an homage to street life and the pleasures of Parisian living. "I can never be sad on the rue des Martyrs," Sciolino explains, as she celebrates the neighborhood’s rich history and vibrant lives. While many cities suffer from the leveling effects of globalization, the rue des Martyrs maintains its distinct allure. On this street, the patron saint of France was beheaded and the Jesuits took their first vows. It was here that Edgar Degas and Pierre-Auguste Renoir painted circus acrobats, Emile Zola situated a lesbian dinner club in his novel Nana, and François Truffaut filmed scenes from The 400 Blows. Sciolino reveals the charms and idiosyncrasies of this street and its longtime residents—the Tunisian greengrocer, the husband-and-wife cheesemongers, the showman who’s been running a transvestite cabaret for more than half a century, the owner of a 100-year-old bookstore, the woman who repairs eighteenth-century mercury barometers—bringing Paris alive in all of its unique majesty. The Only Street in Paris will make readers hungry for Paris, for cheese and wine, and for the kind of street life that is all too quickly disappearing.

Elaine Sciolino is a contributing writer and former Paris bureau chief for the New York Times. She is the author of the New York Times bestseller The Only Street in Paris. She has lived in Paris since 2002.
Anyone who loves Paris’s remaining quirky ‘villages’ will revel in Sciolino’s meticulously reported accounts…Sciolino doesn’t lack for inspiration; she has Paris at her feet.
— New York Times

The narrative takes the form of a ramble through shops, courtyards, cabarets, and time…Sciolino’s sharply observed account serves as a testament to the persistence of old Paris—the city of light, of literature, of life itself.
— The New Yorker

Sciolino is a keen and tireless observer of this ancient little market street…She has written her love letter with such ingenuous passion it’s hard not to cheer up.
— Washington Post

A sublime stroll…The magic of the street is not only its scope—it’s about half a mile—but also its history.
— Wall Street Journal

The former Paris bureau chief of the New York Times shares her love for her adopted working-class neighborhood in this delicious and detailed look at the rue des Martyrs. Her knack for making friends and her reporter’s instincts keep this tour fascinating.

Countless authors have used a city as their muse…A blend of memoir and research, as Sciolino mixes her personal memories of expat life with the stories of artists and luminaries who walked rue des Martyrs before her.
— New Republic

Something interesting for everyone: If you like food, architecture, history, art or simply human stories, you will not be disappointed.
— Christian Science Monitor

Sciolino is a storyteller at heart. She loves to listen to and share other people’s stories…This is a lovely and intimate look at a magical corner of Paris.
— Chicago Tribune