Make Your Own Magic: Secrets, Stories and Tricks from My World (Hardcover) 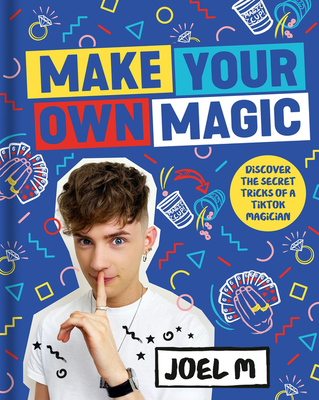 Make Your Own Magic: Secrets, Stories and Tricks from My World (Hardcover)

My name is Joel Mawhinney, though I go by the name Joel M. You might know me from TikTok as @joelmagician.

I'm a 23-year-old from Northern Ireland, who enjoys reading, playing the piano and eating as many burrito bowls as I can, but the most important thing to know about me is...

Magic is my life.

The world of a magician is an unusual one. Between the first and last pages of this little volume you will find stories, confessions and secrets that I hope will convince you that anything is possible.

If you can keep a secret, I'll even share magic tricks you can perform yourself. Inside, you'll learn how to read minds, predict the future, make cards levitate and jewellery vanish. I'll teach you how to perform to an audience and amaze your family and friends. I'll also let you in on the magic of TikTok and reveal how I went viral and gained
millions of followers.

But, above all, I will show you that whatever happens in life, it's
always possible to...

Make Your Own Magic.

Joel Mawhinney is a professional magician and mentalist, and social media star, from Northern Ireland. For over thirteen years, Joel has combined his practical knowledge of psychology, influence and deception, to storm stages across the country. He has hosted his own BBC One show, 'Life is Magic' and a 20-episode children's series on Sky TV.