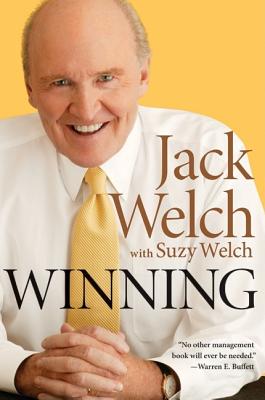 A champion manager of people, Jack Welch shares the hard-earned wisdom of a storied career in what will become the ultimate business bible

With Winning, Jack Welch delivers a wide-ranging, in-depth, no-holds-barred management guidebook about the tough strategic, organizational, and personal challenges that face people at every stage of their careers. Loaded with candid personal anecdotes, hard-hitting advice, and invaluable dos and don’ts, Jack explains his theory of business, by laying out the four most important principles that form the foundation of his success.

Chapters include: How to Get Promoted, How to Think about Strategy, How to Write a Budget that Works, How to Work for a Jerk, How Find Work-Life Balance and How Start Something New. Enlivened by quotes from business leaders that Welch interviewed especially for the book, it’s a tour de force that reflects Welch’s mastery of execution, excellence and leadership.

Jack Welch (1935–2020) was the Executive Chairman of the Jack Welch Management Institute, an online MBA school with more than 1,000 students. Prior to this, for 20 years, he was Chairman and CEO of General Electric Company, which was named the world's most valuable corporation and was consistently voted the most admired company in the world by Fortune magazine. Welch was active in private equity and consulting, working with dozens of businesses in a wide variety of industries. Along with speaking to upwards of a million people around the world, CNBC named Jack Welch one of the Top 10 "Rebels, Icons and Leaders" of the past 25 years.

“Manager of the Century” — Fortune

“When you talk with Jack about management, his energy and passion fill the room.” — WARREN E. BUFFETT, chairman, Berkshire Hathaway