The World's Worsts: A Compendium of the Most Ridiculous Feats, Facts, & Fools of All Time (Hardcover) 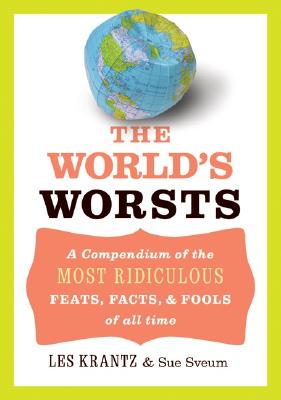 The World's Worsts: A Compendium of the Most Ridiculous Feats, Facts, & Fools of All Time (Hardcover)

A hilarious collection of the lowest of the lows – from the worst generals to the dumbest dogs, the shortest Hollywood marriages to the most dangerous golf courses.

The World's Worsts is the latest compendium of quirky information and vamped–up trivia from Pop Culture guru Les Krantz. This entertaining and utterly addictive reference taps into the dark side of human nature and the less–than–stellar and perhaps best forgotten moments in history.

A recognized sports authority, Les Krantz has worked for the Chicago Tribune, Chicago magazine, Esquire, Ski, and Gold. He is the author of many sports books, including Dark Horses and Underdogs, Reel Baseball, and Not Till the Fat lady Sings.