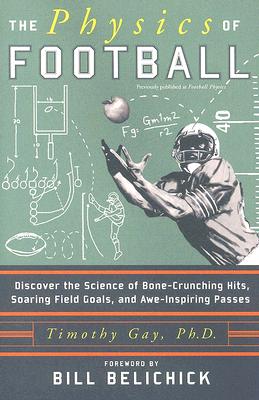 Do you cringe when a linebacker flattens a quarterback? Hold your breath when a field goal sails toward the goalpost? Watch in amazement as a touchdown pass spirals down the field? Behind those big hits, long kicks, and sensational throws is a science that will give you a whole new perspective on the game of football.

A combination of Stephen Hawking and Mike Ditka, physicist and football fan Timothy Gay breaks down the fundamental laws of physics that govern America's most exciting spectator sport. To illustrate the science behind the game, he highlights some of football's recent memorable moments, along with legendary feats from the likes of Franco Harris and Joe Montana.

“Football Physics is great fun. It taught me more about football than 50 years of watching the game.” — Robert K. Adair, Ph.D., author of Physics of Baseball

“I didn’t need physics when I played, but maybe some of these young guys do...” — Chuck Bednarik, Hall of Fame center/linebacker

“I think we’ll be seeing this book in a lot of NFL locker rooms.” — Brad Minerd, producer, NFL films