Misquoting Jesus: The Story Behind Who Changed the Bible and Why (Paperback) 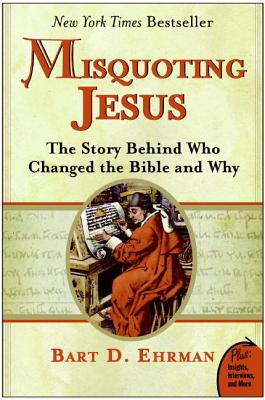 Misquoting Jesus: The Story Behind Who Changed the Bible and Why (Paperback)

For almost 1,500 years, the New Testament manuscripts were copied by hand––and mistakes and intentional changes abound in the competing manuscript versions. Religious and biblical scholar Bart Ehrman makes the provocative case that many of our widely held beliefs concerning the divinity of Jesus, the Trinity, and the divine origins of the Bible itself are the results of both intentional and accidental alterations by scribes.

In this compelling and fascinating book, Ehrman shows where and why changes were made in our earliest surviving manuscripts, explaining for the first time how the many variations of our cherished biblical stories came to be, and why only certain versions of the stories qualify for publication in the Bibles we read today. Ehrman frames his account with personal reflections on how his study of the Greek manuscripts made him abandon his once ultra–conservative views of the Bible.

Bart D. Ehrman is one of the most renowned and controversial Bible scholars in the world today. He is the James A. Gray Distinguished Professor of Religious Studies at the University of North Carolina, Chapel Hill, and is the author of more than twenty books, including the New York Times bestsellers How Jesus Became God; Misquoting Jesus; God’s Problem; Jesus, Interrupted; and Forged. He has appeared on Dateline NBC, The Daily Show with Jon Stewart, CNN, History, and top NPR programs, as well as been featured in TIME, the New York Times, The Washington Post, The New Yorker, and other publications. He lives in Durham, North Carolina. Visit the author online at www.bartdehrman.com.

“Offers a fascinating look into the field of textual criticism and evidence that Scriptures have been altered.” — Charleston Post & Courier

“Whichever side you sit on regarding Biblical inerrancy, this is a rewarding read.” — Dallas Morning News

“One of the unlikeliest bestsellers of the year.” — Washington Post