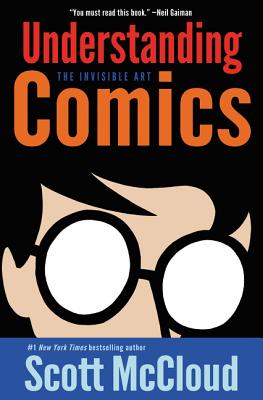 "You must read this book." —Neil Gaiman

The bestselling international classic on storytelling and visual communication.

Praised throughout the cartoon industry by such luminaries as Art Spiegelman, Matt Groening, and Will Eisner, Scott McCloud's Understanding Comics is a seminal examination of comics art: its rich history, surprising technical components, and major cultural significance. Explore the secret world between the panels, through the lines, and within the hidden symbols of a powerful but misunderstood art form.

Scott McCloud has been writing, drawing, and examining comics since 1984. Winner of the Eisner and Harvey awards, his works have been translated into more than sixteen languages. Frank Miller (Sin City, 300) called him "just about the smartest guy in comics." He lives with his family in southern California. His online comics and inventions can be found at scottmccloud.com.

“If you read, write, teach or draw comics; if you want to; or if you simply want to watch a master explainer at work, you must read this book.” — Neil Gaiman

“McCloud’s masterwork is not just an indispensable treatise on comics, it’s also the best primer around on visual literacy and the mechanics of storytelling. A must-read for anyone interested in narrative of any kind.” — Alison Bechdel

“Reading Understanding Comics blew my teenage mind, and gave me a toolbox full of ideas that I still use today.” — Raina Telgemeier

“The best analysis of the medium that I have ever encountered.” — Alan Moore

“BRAVO!! ... A landmark dissection and intellectual consideration of comics as a valid medium. ... Anyone interested in this literary form must read it.” — Will Eisner