Good Book: The Bizarre, Hilarious, Disturbing, Marvelous, and Inspiring Things I Learned When I Read Every Single Word of the Bible (Paperback) 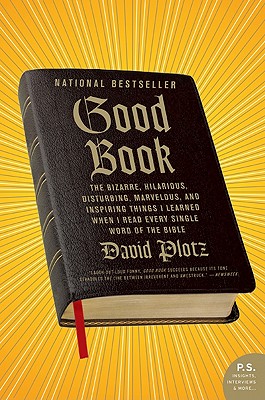 Good Book: The Bizarre, Hilarious, Disturbing, Marvelous, and Inspiring Things I Learned When I Read Every Single Word of the Bible (Paperback)

At a time when wars are fought over scriptural interpretation, when the influence of religion on American politics has never been greater, when many Americans still believe in the Bible’s literal truth, it has never been more important to get to know the Bible. Good Book is what happens when a regular guy—an average Job—actually reads the book on which his religion, his culture, and his world are based. Along the way, he grapples with the most profound theological questions: How many commandments do we actually need? Does God prefer obedience or good deeds? And the most unexpected ones: Why are so many women in the Bible prostitutes? Why does God love bald men so much? Is Samson really that stupid?

David Plotz is the editor of Slate. He has written for The New York Times Magazine, Harper's, Rolling Stone, The New Republic, The Washington Post, and GQ, and is the author of The Genius Factory: The Curious History of the Nobel Prize Sperm Bank. He won the National Press Club's Hume Award for political journalism and has been a National Magazine Award finalist. He lives with his wife, the journalist Hanna Rosin, and their children in Washington, D.C.

“Irreverent. . . . Plotz’s hilarious exegeses will have you laughing out loud. Who knew the Bible was such a riot?” — Time Out New York

“A bloody good book. . . . Very funny. . . . Priceless for those of all traditions who see value in posing unanswerable questions to each other, and to God himself.” — The Minneapolis Star Tribune

“Like the Bible itself, Good Book contains multitudes—it is by turns thought-provoking, funny, enlightening and moving. In short, David Plotz’s book easily lives up to its name. Trust me, Thou shalt enjoy.” — A. J. Jacobs, author of The Year of Living Biblically

“Thanks to David Plotz’s amazing book, I will never have to read The Bible. When can he do this for Madame Bovary?” — Andy Borowitz, author of The Borowitz Report

“Plotz is a genius writer. He can mine Genesis for new insights—and play the book of Job for laughs. He’s the perfect companion for a romp through the Bible: charmingly confessional, a deeply penetrating reader, and at complete ease relating ancient (often obscure) narratives to our modern condition.” — Franklin Foer, author of How Soccer Explains the World