Twelfth Plan: Book I of the Earth Chronicles (Mass Market) 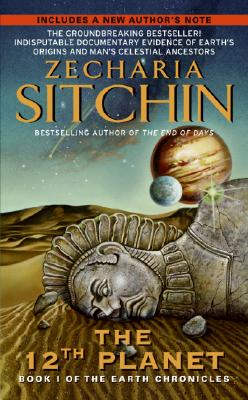 Twelfth Plan: Book I of the Earth Chronicles (Mass Market)

This is book number 1 in the Earth Chronicles series.

A classic of ancient human history—and one of the inspirations behind the History Channel’s Ancient Aliens—Zecharia Sitchin’s Earth Chronicles series is the revelatory and deeply provocative masterwork that forever altered humankind’s view of our history and our destiny.

Over the years, startling evidence has been uncovered, challenging established notions of the origins of life on Earth—evidence that suggests the existence of an advanced group of extraterrestrials who once inhabited our world.

The first book of the revolutionary Earth Chronicles series offers indisputable documentary evidence of the existence of the mysterious planet Nibiru and tells why its astronauts came to Earth eons ago to fashion mankind in their image.

The product of more than thirty years of meticulous research, The 12th Planet treats as fact, not myth, the tales of Creation, the Deluge, the Tower of Babel, and the Nefilim who married the daughters of man. By weaving together the biblical narrative with Sumerian and Babylonian clay-tablet texts, it challenges the established notions of the origins of Earth and mankind, and offers a compelling alternative history and prehistory of both.

Zecharia Sitchin is an internationally acclaimed author and researcher whose books offer evidence that we are not alone in our own solar system. One of a handful of scholars able to read the Sumerian cuneiform tablets, he has combined archaeology, ancient texts, and the Bible with the latest scientific discoveries to retell the history and prehistory of mankind and planet Earth. His trailblazing books have been translated into more than twenty languages; his first one, an oft-quoted classic, celebrates the thirtieth anniversary of its publication. A graduate of the University of London and a journalist and editor in Israel for many years, he now lives and writes in New York.

“One of the most important books on Earth’s roots ever written.” — East-West Magazine

“Heavyweight scholarship...Now a recognized scholar has come forth with a theory that is the most astonishing of all.” — United Press International