The Battery: How Portable Power Sparked a Technological Revolution (Paperback) 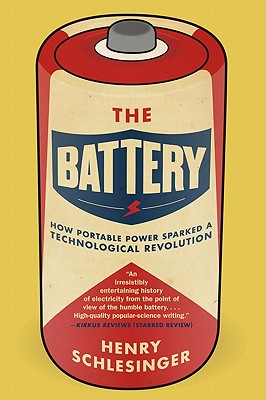 The Battery: How Portable Power Sparked a Technological Revolution (Paperback)

"Henry Schlesinger’s fascinating and superbly researched history of the battery is the story of civilization as we know it." — Michael Belfiore, author of The Department of Mad Scientists

Henry Schlesinger’s The Battery is the first popular history of the technology that harnessed electricity and powered the greatest scientific and technological advances of our time. If you like Wired Magazine and popular science books, you'll love the "hidden history" of The Battery.

Henry Schlesinger is a journalist and author specializing in science and emerging technologies. He is the coauthor of Spycraft: The Secret History of the CIA's Spytechs, from Communism to Al-Qaeda, and lives in New York City.

Just as a cracker-size battery powers a cell phone for days, so does Schlesigner’s wit enliven an unlikely topic--The History of the ever-shrinking, ever more potent Battery.” — Richard Zacks, author of "An Underground Education" and best-seller "The Pirate Hunter"

Henry Schlesinger’s fascinating and supurbly researched history of the battery is the story of civilization as we know it. The Battery illuminates in compellingly rich detail the scientists and entrepreneurs responsible for so much of the technology we take for granted today. — Michael Belfiore, author of The Department of Mad Scientists: How DARPA Is Shaping Our World, from the Internet to Artificial Limbsre