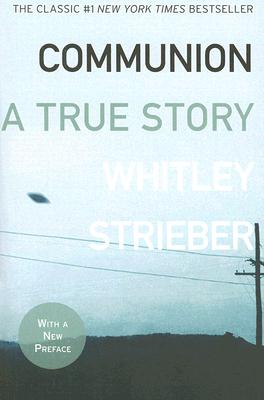 Thus begins the most astonishing true-life odyssey ever recorded—one man's riveting account of his extraordinary experiences with visitors from “elsewhere” . . . how they found him, where they took him, what they did to him, and why.

Believe it. Or don't believe it. But read it—for this gripping story will move you like no other. It will fascinate you, terrify you, and alter the way you experience your world.

Whitley Strieber is the bestselling author of the horror novels The Wolfen and The Hunger, and this memoir, Communion—all of which were made into feature films. His books The Grays and 2012: The War for Souls are both being made into films, and his Web site, unknowncountry.com, is the largest of its kind in the world. Strieber was born and raised in San Antonio, Texas.

“Strieber comes through as both sensible and sincere...His book deserves to be taken seriously.” — Boston Herald

“...COMMUNION is surely the most throught-provoking book on UFOs and alien visitation published so far.” — Rocky Mountain News

“Patently honest...There is no doubt this man has endured experiences of compelling realism.” — Vermont Sunday Magazine

“Vividness of detail and depth of feeling...Convincing!” — New York Tribune

“A fascinating story...And it certainly could be true.” — Detroit News

“Should give second thoughts to even the most hardened skeptic!” — Dow Jones News