The Boy Who Harnessed the Wind: Creating Currents of Electricity and Hope (Paperback) 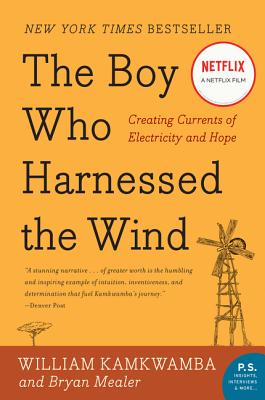 The Boy Who Harnessed the Wind: Creating Currents of Electricity and Hope (Paperback)

“The Boy Who Harnessed the Wind is wonderful on so many levels -- an introduction to village life in Malawi, a funny and inspiring memoir and, above all, a shining example of the capacity of books to change lives. I can't stop thinking and talking about it.”
— Mary Gleysteen, Eagle Harbor Book Company, Bainbridge Island, WA

“This is the heartwarming story of how one 14-year-old Malawian boy, unable to attend school, educated himself about electricity and learned how to make windmills. His accomplishment ended the cycle of drought and starvation-level poverty experienced by his family and the people in his rural village. I learned so much about the country of Malawi and a culture I knew little about. Great for book groups!”
— Linda, Beagle Books, Park Rapids, MN

Now a Netflix Film, Starring and Directed by Chiwetel Ejiofor of 12 Years a Slave

William Kamkwamba was born in Malawi, a country where magic ruled and modern science was mystery. It was also a land withered by drought and hunger. But William had read about windmills, and he dreamed of building one that would bring to his small village a set of luxuries that only 2 percent of Malawians could enjoy: electricity and running water. His neighbors called him misala—crazy—but William refused to let go of his dreams. With a small pile of once-forgotten science textbooks; some scrap metal, tractor parts, and bicycle halves; and an armory of curiosity and determination, he embarked on a daring plan to forge an unlikely contraption and small miracle that would change the lives around him.

The Boy Who Harnessed the Wind is a remarkable true story about human inventiveness and its power to overcome crippling adversity. It will inspire anyone who doubts the power of one individual's ability to change his community and better the lives of those around him.

William Kamkwamba is a New York Times bestselling author and innovator who designs development projects, including safe water delivery and educational access. William tells his journey of how he achieved his dream of bringing electricity, light, and the promise of a better life to his family and his village in his memoir The Boy Who Harnessed the Wind: Creating Currents of Electricity and Hope, co-authored with Bryan Mealer. Since its debut, The Boy Who Harnessed the Wind has sold more than 1 million copies and has been translated into nearly twenty languages worldwide. It has been published in two additional editions, a young reader’s version and a children’s book. After graduating from Dartmouth College in Environmental Studies, William began work as a Global Fellow for the design firm IDEO.org. He is an entrepreneur, TED Fellow, and has worked with the WiderNet Project to develop appropriate technologies curriculums focused on bridging the gap between “knowing” and “doing” for young people in Malawi and across the world. William splits his time between the U.S. and Malawi and is currently working full-time with the Moving Windmills Project to bring the Moving Windmills Innovation Center to life in Kasungu, Malawi.

Bryan Mealer is the author of All Things Must Fight to Live: Stories of War and Deliverance in Congo. He is a former Associated Press staff correspondent and his work has appeared in several magazines, including Harper's and Esquire. He lives in Brooklyn, New York.

“William Kamkwamba’s achievements with wind energy should serve as a model of what one person, with an inspired idea, can do to tackle the crisis we face. His book tells a moving and exciting story.” — Al Gore, former Vice President and Nobel Laureate

“This is an amazing, inspiring and heartwarming story! It’s about harnessing the power not just of the wind, but of imagination and ingenuity. Those are the most important forces we have for saving our planet. William Kamkwamba is a hero for our age.” — Walter Isaacson, author of Einstein and Benjamin Franklin

“This book is inspirational. What William did took nothing more than initiative and a little learning, yet he changed his village and his life. There’s never been a better time to Do It Yourself, and I love how much we can learn from those who often have no other choice.” — Chris Anderson, editor in chief of Wired and author of Free and The Long Tail

“This book is inspirational. What William did took nothing more than initiative and a little learning.... There’s never been a better time to Do It Yourself, and I love how much we can learn from those who often have no other choice.” — Chris Anderson, editor in chief of Wired and author of Free and The Long Tail

“I first met William on stage at TED.... His story, told in just a couple of minutes, was both astonishing and exhilarating. This book proves what those few minutes hinted at: a remarkable individual capable of inspiring many to take their future into their own hands.” — Chris Anderson, TED Curator

“This book.... is a testament to the power of a dream and the freedom that comes from accomplishing a sustainable way of life. Read this book, act on its message and pass it on.” — Carter Roberts, President & CEO, WWF

“This exquisite tale strips life down to its barest essentials, and once there finds reason for hopes and dreams, and is especially resonant for Americans given the economy and increasingly heated debates over health care and energy policy.” — Publishers Weekly (starred review)

“A powerful read. This book takes you on a journey to discover pure innovation and the unfolding story of a natural genius. A true vision of struggle and tenacity to make a bold idea become a reality. This should be required reading for anyone who dares to dream.” — Cameron Sinclair, Eternal Optimist, Architecture for Humanity

“A moving, touching, important story. One more reminder of how small the world is and how powerful the human spirit can be.” — Seth Godin, author of Tribes

“Wonderful! I challenge you to read this story of one young man changing his corner of the world with nothing but intelligence and perseverance and not come away more hopeful about the prospects for a brighter, greener future.” — Alex Steffen, editor, Worldchanging.com

“Beyond opening the door to a nascent genre of African Innovation literature, The Boy Who Harnessed the Wind makes excuses about why Africans can’t change their fates untenable. This potent, powerful, and uplifting message is the heart of William Kamkwamba’s courageous story.” — Emeka Okafor, internationally acclaimed author of blogs Timbuktu Chronicles and Africa Unchained

“ In this book, the spirit, resilience and resourcefulness that are Africa’s greatest strengths shine through.... The Boy Who Harnessed the Wind is a remarkable story about a remarkable young man and his inquisitive and inventive mind.” — Amy Smith, founder, D-Lab, MIT

“I loved this enchanting story of a humble young hero from an impoverished African village who accomplished a miracle with scrap materials and unstoppable enthusiasm. What an inspiration!” — Mark Frauenfelder, founder of boingboing.net, editor in chief of MAKE

“I was moved first to laughter, and then to tears by William’s explanation of how he turned some PVC pipe, a broken bicycle and some long wooden poles into a machine capable of generating sufficient current to power lights and a radio in his parents’ house. — Ethan Zuckerman, cofounder, Global Voices

“One of the best books I’ve ever read.” — Mark Frauenfelder, founder of boingboing.net, editor in chief of MAKE

“A rare and inspiring story of hope in rural Africa....William represents a new generation of Africans, using ingenuity and invention to overcome life’s challenges. Where so many tilt at windmills, William builds them!” — Erik Hersman, AfriGadget.com

“An inspiring tale of an African Cheetah--the new generation of young Africans who won’t sit and wait for corrupt and incompetent governments—or vampire states— to come and do things for them. Here is one who harnessed the wind to generate electricity for his village—on his own.” — Professor George Ayittey, Distinguished Economist, American University

“William will challenge everything you have thought about Africa, about young people, and about the power of one person to transform a community. This beautifully written book will open your heart and mind. I was moved by William and his story and believe you all will. Essential, powerful and compelling.” — Chris Abani, author of Graceland

“William Kamkwamba is an alchemist who turned misfortune into opportunity, opportunity beyond his own. The book is about learning by inventing. William’s genius was to be ingenious.” — Nicholas Negroponte, founder, MIT Media Lab, founder and chairman, One Laptop per Child

“The book abounds with themes that resonate deeply: the idea that with hard work and persistence comes triumph; that optimism is not a mental state but a type of action, that from grief and loss can come success.” — Nathaniel Whittemore, Change.org