Forged: Writing in the Name of God--Why the Bible's Authors Are Not Who We Think They Are (Paperback) 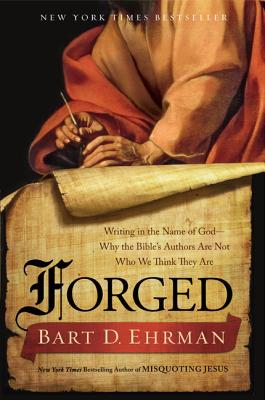 Forged: Writing in the Name of God--Why the Bible's Authors Are Not Who We Think They Are (Paperback)

Bart D. Ehrman, the New York Times bestselling author of Jesus, Interrupted and God’s Problem reveals which books in the Bible’s New Testament were not passed down by Jesus’s disciples, but were instead forged by other hands—and why this centuries-hidden scandal is far more significant than many scholars are willing to admit. A controversial work of historical reporting in the tradition of Elaine Pagels, Marcus Borg, and John Dominic Crossan, Ehrman’s Forged delivers a stunning explication of one of the most substantial—yet least discussed—problems confronting the world of biblical scholarship.

Bart D. Ehrman is one of the most renowned and controversial Bible scholars in the world today. He is the James A. Gray Distinguished Professor of Religious Studies at the University of North Carolina, Chapel Hill, and is the author of more than twenty books, including the New York Times bestsellers How Jesus Became God; Misquoting Jesus; God’s Problem; Jesus, Interrupted; and Forged. He has appeared on Dateline NBC, The Daily Show with Jon Stewart, CNN, History, and top NPR programs, as well as been featured in TIME, the New York Times, The Washington Post, The New Yorker, and other publications. He lives in Durham, North Carolina. Visit the author online at www.bartdehrman.com.