Smart People Should Build Things: How to Restore Our Culture of Achievement, Build a Path for Entrepreneurs, and Create New Jobs in America (Hardcover) 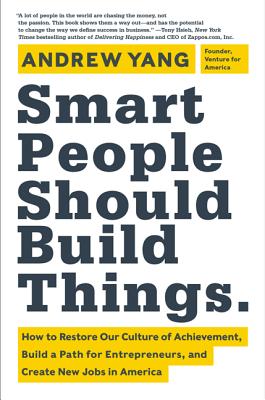 Smart People Should Build Things: How to Restore Our Culture of Achievement, Build a Path for Entrepreneurs, and Create New Jobs in America (Hardcover)

Andrew Yang, the founder of Venture for America, offers a unique solution to our country’s economic and social problems—our smart people should be building things. Smart People Should Build Things offers a stark picture of the current culture and a revolutionary model that will redirect a generation of ambitious young people to the critical job of innovating and building new businesses.

As the Founder and CEO of Venture for America, Andrew Yang places top college graduates in start-ups for two years in emerging U.S. cities to generate job growth and train the next generation of entrepreneurs. He knows firsthand how our current view of education is broken. Many college graduates aspire to finance, consulting, law school, grad school, or medical school out of a vague desire for additional status and progress rather than from a genuine passion or fit.

In Smart People Should Build Things, this self-described “recovering lawyer” and entrepreneur weaves together a compelling narrative of success stories (including his own), offering observations about the flow of talent in the United States and explanations of why current trends are leading to economic distress and cultural decline. He also presents recommendations for both policy makers and job seekers to make entrepreneurship more realistic and achievable.

Andrew Yang is a writer and reality TV enthusiast living in New York City. He studied computer science at the University of Chicago and has a day job as a coder. Andrew is a devoted fan of the writer Elena Ferrante, whose Neapolitan Novels are his favorite book series. He enjoys studying languages, rooting for his favorite sports teams, and trying new recipes with his air fryer. I’m Not Here to Make Friends is his debut novel.

“Yang’s pitch for entrepreneurship as a viable alternative to more structured careers is enticing.” — Publishers Weekly

“Andrew Yang lays out a solution that is a proven winner for not only the young generation coming of age, but for the nation as a whole.” — Dan Gilbert, chairman and founder of Rock Ventures

“I have great respect for the foresight Andrew brought to his groundbreaking start-up, Venture for America, and Andrew has become living proof that it’s possible to create a platform that makes it easier than ever for the country’s best and brightest to help others succeed.” — Jeff Weiner, CEO of LinkedIn

“Andrew is one of those rare visionaries who puts dreams into action. This book is a roadmap for young people in designing their careers, a playbook for policy makers for rebuilding our cities, and a path forward to moving entrepreneurship back to the center of the American economy.” — Arianna Huffington, founder and Editor-in-Chief of the Huffington Post

“I wish this book and Venture for America had existed when I graduated from college and wanted to make the world a better place but didn’t know where to turn. This book details how we can channel our top graduates into impactful entrepreneurial opportunities while addressing our economy’s biggest problems.” — Dave Gilboa, co-founder and co-CEO of Warby Parker

“A lot of people in the world are chasing the money, not the passion. Smart People Should Build Things shows them a way out -- and has the potential to change the way we define success in business.” — Tony Hsieh, NY Times bestselling author of "Delivering Happiness" and CEO of Zappos.com, Inc.

“Enlightening and frequently surprising and moves much of the author’s pro-entrepreneurship slant from conventional wisdom into fact-based guidance for the “young, hungry talent” he hopes will help rebuild the American economy. A galvanizing amalgam of personal history, acquired business wisdom and mentorship.” — Kirkus Reviews