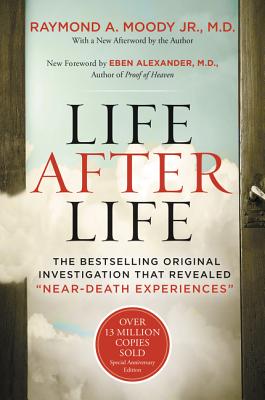 The groundbreaking, bestselling classic, now available in a special fortieth-anniversary edition that includes a new Foreword from Eben Alexander, M.D., author of Proof of Heaven, and a new Afterword by the author.

Raymond Moody is the “father” of the modern NDE (Near Death Experience) movement, and his pioneering work Life After Life transformed the world, revolutionizing the way we think about death and what lies beyond. Originally published in 1975, it is the groundbreaking study of one hundred people who experienced “clinical death” and were revived, and who tell, in their own words, what lies beyond death.

A smash bestseller that has sold more than thirteen million copies around the globe, Life After Life introduced us to concepts—including the bright light, the tunnel, the presence of loved ones waiting on the other side—that have become cultural memes today, and paved the way for modern bestsellers by Eben Alexander, Todd Burpo, Mary Neal, and Betty Eadie that have shaped countless readers notions about the end life and the meaning of death.

Raymond A. Moody Jr., Ph.D., M.D., is a world-renowned scholar, lecturer, and researcher, and he is widely recognized as the leading authority on near-death experiences. He is the bestselling author of many books, including Paranormal: My Life in Pursuit of the Afterlife.

“It is research like Dr. Moody presents in his book that will enlighten many and will confirm what we have been taught for two thousand years -- that there is life after death.” — Elisabeth Kubler-Ross, M.D., author of On Death and Dying