Twilight Children: Three Voices No One Heard Until Someone Listened (Paperback) 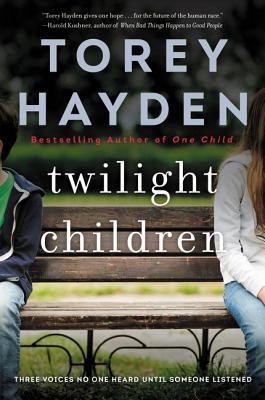 Twilight Children: Three Voices No One Heard Until Someone Listened (Paperback)

From the bestselling author of One Child comes the story of three of former special education teacher Torey Hayden’s most extraordinary challenges.

Nine-year-old Cassandra, kidnapped by her father and found starving, dirty, and picking through garbage cans—is a child prone to long silences and erratic, violent behavior.

Charming, charismatic four-year-old Drake will speak only in private to his mother—while his tough, unbending grandfather's demands for an immediate cure threatens to cause irreparable harm.

And though she had never worked with adults, Hayden agrees to help fearful and silent eighty-two-year-old massive stroke victim Gerda—discovering in the process that a treatment's successes could prove nearly as heartbreaking as its limitations.

Torey Hayden is an educational psychologist and a former special education teacher who since 1979 has chronicled her struggles in the classroom in a succession of bestselling books. She lives and writes in the U.K.

“This is a compulsively readable book.” — Publishers Weekly (starred review)