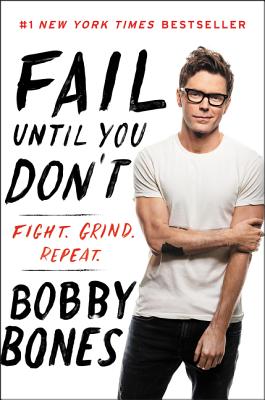 The #1 New York Times bestselling author of Bare Bones, host of the marquee morning program “The Bobby Bones Show,” comedian and dedicated philanthropist delivers an inspirational and humorous collection of stories about his biggest misses in life and how he turned them into lessons and wins.

Bobby Bones is the youngest inductee ever into the National Radio Hall of Fame alongside legends Dick Clark, Larry King, and Howard Stern. As "the most powerful man in country music" (Forbes), he has reached the peak of his profession and achieved his childhood dreams. Each weekday morning, more than five million fans tune in to his radio show.

But as Bobby reveals, a lot of what made him able to achieve his goals were mistakes, awkward moments, and embarrassing situations—lemons that he turned into lemonade through hard work and humility. In this eye-opening book, he’ll include ideas and motivations for finding success even when seemingly surrounded by impossible odds or tough failures. He also includes anecdotes from some of his famous friends—Andy Roddick, Chris Stapleton, Charlamagne Tha God, Charles Esten, Brooklyn Decker, Walker Hayes and Asa Hutchinson—who open up about their own missteps.

Bobby’s mantra is Fight. Grind. Repeat. A man who refuses to give up, he sees failure as something to learn from—and the recollections in this funny, smart book, full of Bobby’s brand of self-effacing humor, show how he’s become such a beloved goofball.

Inducted into the National Radio Hall of Fame as the youngest honoree ever, Bobby Bones has been dubbed “the most powerful man in country music” by Forbes. His nationally syndicated radio show, The Bobby Bones Show, reaches millions of listeners weekly on more than one hundred stations and recently garnered its third Academy of Country Music Award for National On-Air Personality of the Year, also earning a 2017 Country Music Association Award for National Broadcast Personality of the Year. When he’s not on the air, Bones is performing stand-up comedy for sold-out audiences, sitting down with country’s biggest stars for his own podcast, The BobbyCast, or hitting the road with his comedy band, Bobby Bones and The Raging Idiots. Additionally, he appeared on ABC’s American Idol as the mentor to the Top 24 contestants. His memoir, Bare Bones, landed at #1 on the New York Times, USA Today, and Wall Street Journal bestseller lists.

”Fail Until You Don’t: Fight. Grind. Repeat details a simple but effective way to fight through the minutia of day-to-day work with hopes to position yourself for a shot at success.” — Forbes