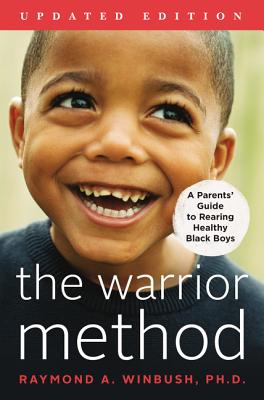 In this groundbreaking book, Raymond Winbush introduces a program for raising black boys to become warriors against global racism and poverty and advocates for their communities in America and abroad—now updated.

“A work of this caliber is long overdue."—Dr. Henry Foster, Former Senior Advisor to President Clinton

In The Warrior Method, psychologist, educator, and father Raymond Winbush creates a program designed for parents and teachers to help black boys become strong, self-reliant men. Filled with reflections on the author's own experiences, the book looks at a male's life through the prism of four seasons: spring—conception to four years old; summer—ages five through twelve; autumn—ages thirteen through twenty-one; and winter—age twenty-two and beyond.

Winbush's comprehensive step-by-step approach draws on such African traditions as the "Birthing Circle" and a "Young Warriors Council" to help boys make important transitions, along with other modern variations on tribal customs that instill the values of self-respect, dignity, and honor. The method encourages black boys and their parents to have a global view of the state of black people which enriches their view of themselves.

This updated, timely edition takes into account the special challenges boys face in today’s political climate, which has witnessed a surge in hate crimes, excessive police force, and an even more divided and racially-charged society since President Barack Obama left office. Furthermore, The Warrior Method demonstrates the positive influence and lasting impact that Black Panther’s racial pride and the Black Lives Matter Movement have had and how they will continue to affect future generations of young black men.

Raymond A. Winbush, Ph.D. is the Director of the Institute for Urban Research at Morgan State University. He received his undergraduate degree in psychology from Oakwood College in Alabama and received a fellowship to attend the University of Chicago, where he earned both his master's degree and Ph.D. in psychology. He has taught at Oakwood College, Alabama A&M, Vanderbilt University, and Fisk University. He is the recipient of numerous grants, including one from the Kellogg Foundation to establish a "National Dialogue on Race." He is the author of The Warrior Method: A Parents' Guide to Rearing Healthy Black Boys, the former treasurer and executive board member of the National Council of Black Studies, and is currently on the editorial board of the Journal of Black Studies. He lives in Baltimore, Maryland.