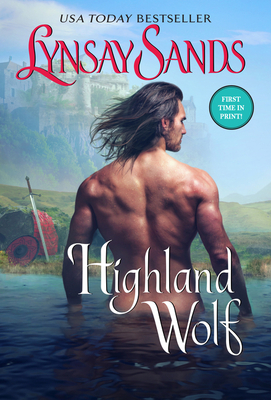 This is book number 10 in the Highland Brides series.

In all her daydreams about her wedding day, Lady Claray MacFarlane never once imagined being dragged to the altar by her greedy uncle and forced to marry a man she didn’t know. But that’s what happened, or would have, had a Highland warrior not snatched her up at the last minute and ridden off with her in his arms. . .

They call him the Wolf. The mercenary’s courage and prowess in battle are known throughout the Highlands, and with his handsome face and black-as-sin hair, he is as intelligent and deadly as the wolf he was named for…

But the Wolf is also Claray’s betrothed. Thought to have been killed as a child, he’s been in hiding all these years. Now he’s determined to earn enough coin to rebuild his home, reclaim his birthright, and honor his marriage contract to Claray. For he’s fallen for the tender-hearted lass…and he will do anything to protect her and their future together.

Lynsay Sands is the nationally bestselling author of the Argeneau/Rogue Hunter vampire series, as well as numerous historicals and anthologies. She’s been writing since grade school and considers herself incredibly lucky to be able to make a career out of it. Her hope is that readers can get away from their everyday stress through her stories, and if there are occasional uncontrollable fits of laughter, that’s just a big bonus. Please visit her on the web at www.lynsaysands.net.

“You can’t help but fall in love with Lynsay Sands!” — Christina Dodd

“Highland Treasure completely swept me up with its exciting plot and wonderful cast of characters right from the first page. Lynsay Sands outdid herself with this latest installment in her Highland Brides series which was all about fan favorite (and mine!!) Rory Buchanan . . . With its compelling storyline and slow burn romance, Highland Treasure was thrilling, heartfelt foray back to England and the Scottish Highlands.”  — Harlequin Junkies

“Highland Treasure is Sands at her best. Whether it’s her trademark belly rolling humor, the edge of your seat danger or the sweet romance, you’ll be thoroughly entertained, start to finish.”  — Fresh Fiction