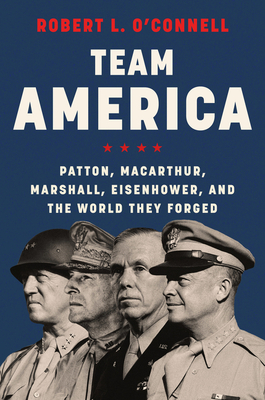 Now in paperback, from national bestselling author and acclaimed military historian Robert L. O’Connell, a dynamic history of four military leaders whose extraordinary leadership and strategy led the United States to success during World War I and beyond.

By the first half of the twentieth century, technology had transformed warfare into a series of intense bloodbaths in which the line between soldiers and civilians was obliterated, resulting in the deaths of one hundred million people. During this period, four men exhibited unparalleled military leadership that led the United States victoriously through two World Wars: Douglas MacArthur, George Patton, George Marshall, and Dwight “Ike” Eisenhower; or, as bestselling author Robert O’Connell calls them, Team America.

O’Connell captures these men’s unique charisma as he chronicles the path each forged—from their upbringings to their educational experiences to their storied military careers—experiences that shaped them into majestic leaders who would play major roles in saving the free world and preserving the security of the United States in times of unparalleled danger. O’Connell shows how the lives of these men—all born within the span of a decade—twisted around each other like a giant braid in time. Throughout their careers, they would use each other brilliantly in a series of symbiotic relationships that would hold increasingly greater consequences.

At the end of their star-studded careers (twenty-four out of a possible twenty-five), O’Connell concludes that what set Team America apart was not their ability to wield the proverbial sword, but rather their ability to plot strategy, give orders, and inspire others. The key ingredients to their success was mental agility, a gravitas that masked their intensity, and an almost intuitive understanding of how armies in the millions actually functioned and fought. Without the leadership of these men, O’Connell makes clear, the world we know would be vastly different.

Robert L. O'Connell received a PhD in history at the University of Virginia and spent three decades as a senior analyst at the National Ground Intelligence Center, followed by fourteen years as a visiting professor at the Naval Postgraduate School. He is the author of numerous books, two of which, The Ghosts of Cannae: Hannibal and the Darkest Hour of the Roman Republic and Fierce Patriot: The Tangled Lives of William Tecumseh Sherman, were national bestsellers, the latter winning the 2015 William H. Seward Award for Excellence in Civil War Biography. He lives with his wife, Benjie, in Charlottesville, Virginia.

“A sweeping overview of four men whose careers largely defined the American experience in the 20th century. . . . O’Connell narrates with a lively style, with plenty of lighter moments balancing the rigors of the subjects’ military careers. . . . the book is serious and worthy of the subjects.” — Kirkus Reviews

"A de­li­cious blend of in­sight, wit and his­tory, “Team Amer­ica” is a punch-packed in­tro­duc­tion to four great mil­i­tary minds and the zeit­geist that pro­duced them." — Wall Street Journal

"Call it destiny or luck, America was fortunate to have extraordinary military leaders and “soldier-statesmen” during World War II and the Cold War that followed. They were not perfect human beings, by any means, but they possessed a genius for war and, most of the time, for keeping the peace. Robert O'Connell has written a rollicking, insightful story of some particularly American heroes."  — Evan Thomas, author of Ike’s Bluff

“O’Connell delivers an entertaining group biography. . . . he incisively analyzes these commanders’ strengths and weaknesses and their essential roles in transforming the U.S. Army. Military history buffs will be enthralled.” — Publishers Weekly

“Insightful and informative. . . . ‘Team America’ combines compelling biographies of our heroes as they reach the heights of military, then civilian, leadership during five pivotal decades. O’Connell also explains why industrial warfare grew into a juggernaut, and how they managed to control it to achieve an uncertain peace that still holds.” — Associated Press

"Team America profiles the lives of four extraordinary military leaders on and off the battlefield. Author Robert L. O’Connell has constructed a wonderful quadrilateral perspective of Patton, Eisenhower, MacArthur, and Marshall along with their long-lasting impact in the world of combat and leadership. All four men walked divergent paths off the field but shared common ground in their loyalty to the country. Brilliant work." — Seattle Book Review

“[O’Connell] writes clearly and concisely. . . . He has a feel for the important detail and for how the personal, political, and strategic work together. . . . [He] has provided a service in laying out in full these men’s great contributions.” — American Spectator

“Melding rock-solid research with lively analysis of their larger-than-life personas, O’Connell makes a convincing case for why the foursome —whom he dubs “Team America” — is, and continues to be, history’s most influential cabal of military leaders.” — HistoryNet