Across the River: Life, Death, and Football in an American City (Hardcover) 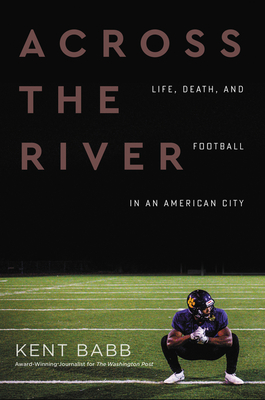 Across the River: Life, Death, and Football in an American City (Hardcover)

On the west bank of the Mississippi lies the New Orleans neighborhood of Algiers. Short on hope but big on dreams, its mostly poor and marginalized residents find joy on Friday nights when the Cougars of Edna Karr High School take the field. For years, this football program has brought glory to Algiers, winning three consecutive state championships and sending dozens of young men to college on football scholarships.

Although he is preparing for a fourth title, head coach Brice Brown is focused on something else: keeping his players alive. An epidemic of gun violence plagues New Orleans and its surrounding communities and has claimed many innocent lives, including Brown’s former star quarterback, Tollette “Tonka” George, shot near a local gas station.

In Across the River, award-winning sports journalist Kent Babb follows the Karr football team through its 2019 season as Brown and his team—perhaps the scrappiest and most rebellious group in the program’s history—vie to again succeed on and off the field. What is sure to be a classic work of sports journalism, Across the River is a necessary investigation into the serious realities of young athletes in struggling neighborhoods: gentrification, eviction, mental health issues, the drug trade, and gun violence. It offers a rich and unflinching portrait of a coach, his players, and the West Bank, a community where it’s difficult—but not impossible—to rise above the chaos, discover purpose, and find a way out.

KENT BABB is a reporter for The Washington Post and author of the acclaimed Not a Game: The Incredible Rise and Unthinkable Fall of Allen Iverson. His writing examines the intersection of sports and culture, and three of his stories appeared in The Best American Sports Writing. The Associated Press Sports Editors have three times honored his features as the nation’s best, and Not a Game was shortlisted for the PEN/ESPN Award for Literary Sports Writing. He lives in the Washington, DC, area with his wife and daughter.

“Babb takes us to a place most of us would never go, telling us a story we’d never know. This book is so important.” — PETER KING, NBC Sports

"A penetrating, wide-screen story of what it means to mentor under the toughest of circumstances." — Kirkus Reviews (starred review)

“This spectacular book carefully fuses voice and tone to transport the reader into a world few can imagine and transforms the tales of disparate individuals into a narrative that is both touching and tragic.” — DeMAURICE SMITH, executive director, NFL Players Association

“ Masterful . . . an equal parts heartbreaking and life-affirming look at a city, a school, and a football team whose players and coaches spend as much time fighting for survival as they do grid triumph.” — JEFF PEARLMAN, New York Times bestselling author of Three-Ring Circus

"This is the story the country needs to read--raw, expertly told, stripped of political agendas and preconceived notions. This is not a story about football, but about what football can mean." — MICHAEL ROSENBERG, senior writer, Sports Illustrated

"A moving and evocative portrait of football and life" — Publishers Weekly

"I've always thought the best books are those that combine great reporting and great writing. That's exactly what Kent Babb's Across The River does. It combines deeply detailed inside reporting with a wonderfully told story." — JONATHAN FEINSTEIN, New York Times Bestselling author of A Good Walk Spoiled

“At the Karr High School introduced to us by Kent Babb there is the expression, ‘Give Em The Real.' This book is ‘the real.' It’s as real as birth and death and all the heartache in between. Through Babb’s eyes, the story of Karr football is so much more than a sports book. This is the other America that too many people don’t know - or care to know – exists.” — DAVE ZIRIN, sports editor, The Nation

"a literary masterpiece. Lyrically written and deeply reported, Across the River reads like a gripping, can’t-put-it-down novel.” — LARS ANDERSON, New York Times bestselling author of The Mannings and Chasing the Bear

“This is an essential American read and an intimate look into the soul of New Orleans.” — WRIGHT THOMPSON, ESPN senior writer and author of Pappyland

“There is no better storyteller in the country than Kent Babb. Period. I’ve never learned more about the fabric of one of America’s greatest cities than I did in this book.” — IAN RAPOPORT, NFL Network Insider

“In Across the River Kent Babb keeps it real as he deftly and eloquently negotiates the sidewalks, the sidelines, and the streets of New Orleans.” — GLENN STOUT, editor, The Year’s Best Sports Writing