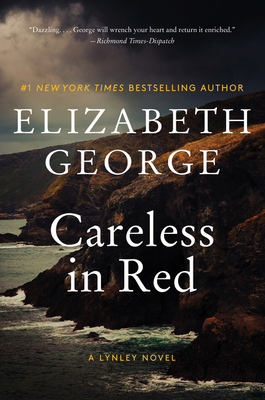 This is book number 15 in the A Lynley Novel series.

After the senseless murder of his pregnant wife, Detective Superintendent Thomas Lynley hands in his badge and walks out of Scotland Yard. He goes home to Cornwall. The only way he can deal with his painful memories is to hike the trails over the cliffs of the Cornish coast. There, on the forty-third day of his walk, he finds the lifeless body of a young man, dead from a fall.

Thus begins a quest to unmask a clever and ruthless murderer. But this time, Lynley’s not in charge. He’s a witness—and possibly even a suspect. The vastly understaffed local copper in charge of the investigation soon figures out that Lynley can help. So can his former associate Barbara Havers, whom Scotland Yard sends to Cornwall, ostensibly to assist in the investigation, but unofficially to keep an eye on Lynley and maybe lure him back to his job.

Elizabeth George is the New York Times bestselling author of sixteen novels of psychological suspense, one book of nonfiction, and two short story collections. Her work has been honored with the Anthony and Agatha awards, the Grand Prix de Littérature Policière, and the MIMI, Germany's prestigious prize for suspense fiction. She lives in Washington State.

“One of the most powerful, beautifully nuanced and honest novels to appear in ages. . . . A portrayal of love and loss and secrets and family . . . I didn’t want it to end. When it does, this time most readers will be smiling.” — Plain Dealer (Cleveland)

“Will make new readers instant fans who will then be tempted to read all of George’s Lynley novels.” — USA Today

“One of George’s best books in years. . . . George plays the cross-eddies of a dozen or so characters, making each so vivid. . . . The return is to be immersed in a small village in Cornwall in which everyone’s life becomes an open book.” — Daily News (New York)

“A tale of fathers and son, of revenge served cold, and perhaps, of the perfect crime. But at its heart, it’s a meditation on the importance of fighting every day for even a single, tiny scrap of redemption.” — Times-Picayune (New Orleans)

“Readers who value writing that is intelligent, surprising, sexy, funny, compassionate and wise should find Careless in Red a delight.” — Washington Post

“As is her wont, George will wrench your heart and return it enriched.” — Richmond Times-Dispatch

“Stick with Careless in Red for the deftly drawn local characters, the alluring descriptions of Cornish country and custom, and for a fiendishly clever surprising ending.” — News & Observer (Raleigh)

“Elizabeth George’s Careless in Red is a mystery wrapped in a psychological enigma, which has become true to form for Ms. George....the classic scene of her favorite detective team probing the whys and hows of violent death, yet she has put a twist in that trail....It’s a chaotic and fascinating mix of the kind of which Ms. George excels and she manages to tantalize the reader....Ms. George has outdone herself.” — Washington Times

“Careless in Red is no mere whodunnit. Everyone in this novel has something to hide and something to admit....George lifts us up again. There is hope of renewal, if only we are strong enough to accept it.” — St. Petersburg Times

“As readers of George’s top-notch mysteries have come to expect, the plotlines are dense, the characters complex, and there are enough dark secrets to fill Pandora’s box.” — Christian Science Monitor