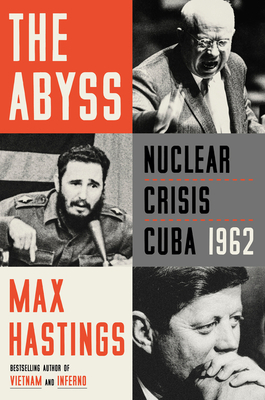 Bestselling author Max Hastings offers a welcome re-evaluation of one of the most gripping and tense international events in modern history—the Cuban Missile Crisis—providing a people-focused narrative that explores the attitudes and conduct of Russians, Cubans, Americans, and a terrified world that followed each moment as it unfolded.

In The Abyss, Max Hastings turns his focus to one of the most terrifying events of the mid-twentieth century—the thirteen days in October 1962 when the world stood on the brink of nuclear war. Hastings looks at the conflict with fresh eyes, focusing on the people at the heart of the crisis—America President John F. Kennedy, Soviet First Secretary Nikita Khrushchev, Cuban Prime Minister Fidel Castro, and a host of their advisors.

Combining in-depth research with Hasting’s well-honed insights, The Abyss is a human history that unfolds on a wide, colorful canvas. As the action moves back and forth from Moscow to Washington, DC, to Havana, Hastings seeks to explain, as much as to describe, the attitudes and conduct of the Soviets, Cubans, and Americans, and to recreate the tension and heightened fears of countless innocent bystanders whose lives hung in the balance. Reflecting on the outcome of these events, he reveals how the aftermath of this momentous crisis continues to reverberate today.

Powerful, and riveting, filled with compelling detail and told with narrative flair, The Abyss is history at its finest.

Max Hastings is the author of twenty-eight books, most about conflict, and between 1986 and 2002 served as editor in chief of the Daily Telegraph, then as edi­tor of the Evening Standard. He has won many prizes, for both his journalism and his books, the most recent of which are the bestsellers Vietnam, The Secret War, Catastrophe, and All Hell Let Loose. Knighted in 2002, Hastings is a Fellow of the Royal Society of Literature, an Honorary Fellow of King’s College London, and a Bloomberg Opinion colum­nist. He has two grown children, Charlotte and Harry, and lives with his wife, Penny, in West Berkshire, where they garden enthusiastically.

"Hastings . . . highlights in this engrossing account just how close the U.S. and the Soviet Union came to nuclear war in October 1962. . . . Throughout, Hastings draws sharp personality profiles of John F. Kennedy, Nikita Khrushchev, Fidel Castro, and their top-level advisers, and expertly mines archival records to recreate the contemporaneous rationale for their decision-making, even when it looks foolish or reckless in hindsight. . . . This riveting history speaks clearly to the present moment." — Publishers Weekly (starred review)

“One of the greatest living historians tackles the Cuban missile crisis. . . . Hastings argues that Kennedy prevented a catastrophic conflict by deciding that [bombing strategic sites and invading] was a bad idea. Instead, he ordered a blockade and sent a warning to Khrushchev, who withdrew the missiles. The author’s painfully insightful conclusion credits Kennedy with brilliant statesmanship but adds that most successors would have chosen war. The definitive account of a brief yet frightening period in global history.
— Kirkus Reviews

Hastings . . . masterfully places the Cuban Missile Crisis within the tensions and relations between the United States and the Soviet Union in their Cold War context. The tense and suspenseful atmosphere interweaving the negotiations and political developments . . . are palpable in this elegantly written account. The personalities of all major players . . . are all fully realized in this book. . . . Based on extensive archival research, including in the UK, this eminently readable account provides a nice, single volume overview of the Cuban Missile Crisis. — Library Journal

The Cuban Missile Crisis . . . easily could have escalated to nuclear war. . . . notable historian Hastings provides a narrative more coherent than would have been experienced by the principals, emphasizing how limited information could have led to disaster, such as when the USSR's Nikita Khrushchev proposed to base nuclear missiles in Cuba as his military assured could be done secretly and without provoking the U.S. . . . Replete with astute characterizations of participants in the crisis, Hastings' able account registers the peril humanity then faced and still faces in a world of competitive, nuclear-armed countries. — Booklist

[Hastings’s] incisive account of the standoff between the US and Russia has chilling and timely lessons 60 years on . . . . Abyss provides chastening lessons on how easily things can spiral out of control but also how catastrophe can be averted. — The Guardian

"Max Hastings’s brilliantly told account of the Cuban missile crisis shows how the word 'abyss' is no exaggeration for the drama that unfolded 60 years ago. . . . Hastings has cleverly woven the story together from all sides, most interestingly from little-known Cuban sources previously unused in American, Russian or European accounts." — Air Mail

"Max Hastings brings his signature style – a mixture of the grand (sweeping insights into great events) and the granular (carefully sifted details from diaries and letters of ordinary people) – to the much-studied subject of the Cuban missile crisis. The result is a book to match the best things ever written on the subject in terms of immediacy and drama.” — Christian Science Monitor