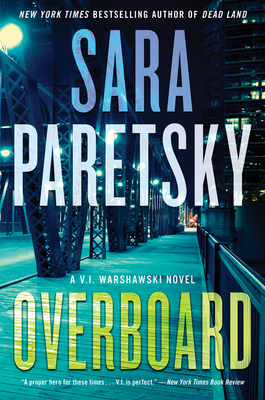 This is book number 22 in the V.I. Warshawski Novels series.

On her way home from an all-night surveillance job, V.I. Warshawski’s dogs lead her on a mad chase that ends when they discover a badly injured teen hiding in the rocks along Lake Michigan. The girl only regains consciousness long enough to utter one enigmatic word. V.I. helps bring her to a hospital, but not long after, she vanishes before anyone can discover her identity. As V.I. attempts to find her, the detective uncovers an ugly consortium of Chicago powerbrokers and mobsters who are prepared to kill the girl. And now V.I.’s own life is in jeopardy as well.

Told against the backdrop of a city emerging from its pandemic lockdown, Overboard lays bare the dark secrets and corruption buried in Chicago’s neighborhoods in a masterly fashion.

Hailed by P. D. James as “the most remarkable” of modern crime writers, Sara Paretsky is the New York Times bestselling author of twenty-two novels, including the renowned V.I. Warshawski series. She is one of only four living writers to have received both the Grand Master Award from the Mystery Writers of America and the Cartier Diamond Dagger from the Crime Writers Association of Great Britain. She lives in Chicago.

“Fiercely independent private detective V.I. Warshawski... has been a favorite since her debut in 1982, and in this enjoyable 22nd installment of the series, even a pandemic won’t stop her from setting wrongs to right.” — Washington Post on Overboard

"Well-plotted... Series readers will recognize the steady buildup of Vic’s insistence on justice at any cost, a reliable characteristic of these books." — New York Journal of Books on Overboard

"[A] compelling, fast-paced and original mystery.” — BookPage on Overboard

Propulsive.... The tale’s relentless pacing, sky-high stakes, and strong social justice advocacy should keep readers invested in the expertly crafted characters’ fates. Series fans will get their money’s worth.” — Publishers Weekly on Overboard

“Intricate and involving.… Overboard offers the comfort of a throwback, enlisting classic PI-story motifs, such as disguises, heartless villains, escapes on foot and feats of physical daring. Would it even be a Warshawski novel without that last one?” — Shelf Awareness

"In pursuit of the truth about rapacious developers, skeevy nursing home operators and corrupt cops, Vic ends up in a lot of places she doesn’t want to be.... How is it all connected? With Warshawski on the case, finding out is a dark ride." — Tampa Bay Times on Overboard

“The new VI Warshawski novel is a worthy addition to one of crime fiction’s long-standing gems.... Paretsky paints a vivid picture of a city slowly working through the traumas of the pandemic and a woman still very much in imminent danger.” — Crime Reads on Overboard

"Readers can find comfort in the dedication V.I. gives the cries for help she hears from friends, neighbors, and strangers... Very few series authors deliver as masterfully as Sara Paretsky.” — San Francisco Book Review on Overboard

“A proper hero for these times . . . To us, V.I. is perfect.” — Marilyn Stasio, New York Times Book Review, on Dead Land

“As usual, Paretsky is less interested in identifying whodunit than in uncovering a monstrous web of evil, and this web is one of her densest and most finely woven ever. So fierce, ambitious, and far-reaching that it makes most other mysteries seem like so many petit fours.” — Kirkus Reviews on Dead Land

"A crime-fiction pro struts her stuff." — People on Love & Other Crimes

“Wonderful company and a rich discovery awaiting those who have yet to meet [Warshawski]. ” — Los Angeles Times

“Sara Paretsky’s legendary P.I. is at the top of her game.” — Tess Gerritsen

“An author of matchless intelligence, craft, and power. This is why Sara Paretsky reigns as one of the all-time greats.” — Karin Slaughter, New York Times bestselling author of Pieces of Her and False Witness

“Legendary V.I. Warshawski is as dogged and ferocious as ever. So is Sara Paretsky, who is at the top of her crime novel game.”
— C.J. Box

“V.I. Warshawski is one of my all-time favorite investigators. Doesn’t get any better than this!” — Lisa Gardner

“Among today’s P.I.’s, nobody comes close to Warshawski.” — Publishers Weekly

“Revel in the superb pacing, the well-developed characters and the crisp dialogue from one of the most consistently excellent writers in the genre.” — BookPage