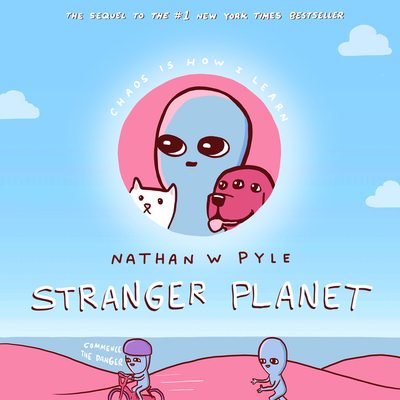 In this eagerly awaited sequel, Nathan takes us back to his charming and instantly recognizable planet colored in bright pinks, blues, greens, and purples, providing more escapades, jokes, and p h r a s e s.

Nathan mixes his most popular Instagram comics with more than thirty original works created exclusively for this second volume to explore four major topics: traditions, nature, emotions, and knowledge. He inducts new and longtime fans into a strangely familiar world and its culture, from “cohesion” (marriage) to “mild poison” (alcohol) to the full lyrics to “The Small Eight-Legged Creature” (sung to the tune of The Itsy-Bitsy Spider).

Nathan W. Pyle is the #1 New York Times bestselling author of Strange Planet, Stranger Planet, NYC Basic Tips and Etiquette, and 99 Stories I Could Tell. He is a former staff writer and illustrator for BuzzFeed. He is based in New York City but travels the country speaking about creativity and storytelling.