Of Blood and Sweat: Black Lives and the Making of White Power and Wealth (Hardcover) 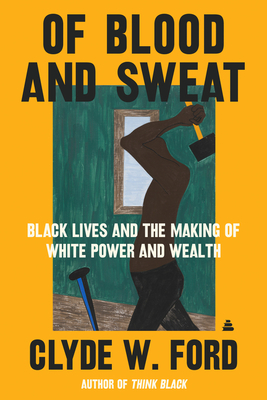 Of Blood and Sweat: Black Lives and the Making of White Power and Wealth (Hardcover)

“Ford’s overlap of past and present, narrative and commentary is masterful, and makes this volume all the more valuable to those readers wise enough to allow the past to inform the future. Of Blood and Sweat is a myth-busting work of genius that will stand as the last word on this vital subject for a long time to come.”—Elizabeth Dowling Taylor, New York Times bestselling author of A Slave in the White House and The Original Black Elite

In this, provocative, timely, and painstakingly researched book, the award-winning author of Think Black tells the story of how Black labor helped to create and sustain the wealth of the white one percent throughout American history.

Clyde W. Ford uses the lives of individual Black men and women as a lens to explore the role they have played in creating American institutions of power and wealth—in agriculture, politics, jurisprudence, law enforcement, culture, medicine, financial services, and many other fields—while not being allowed to fully participate or share in the rewards. Today, activists have taken the struggle for racial equity and justice to the streets. Of Blood and Sweat goes back through time to excavate the roots of this struggle, from pre-colonial Africa through post-Civil War America. As Ford reveals, in tracing the history of almost any major American institution of power and wealth you’ll find it was created by Black Americans, or created to control them.

Painstakingly researched and documented, Of Blood and Sweat is a compelling look at the past that holds broad implications for present-day calls for racial equity, racial justice, and the abolishment of systemic racism, and offers invaluable insight into our understanding of Black history and the story of America.

Clyde W. Ford was born in NYC. He’s the author of thirteen works of fiction and non-fiction. He's also a psychotherapist, an accomplished mythologist, and a sought-after public speaker. In 2006, Ford received the Zora Neale Hurston/Richard Wright Award in African American fiction. He was named a “Literary Lion” by the King County Library System in 2006, 2007, 2008, and 2019. Clyde was voted “Best Writer of Bellingham, Washington” in 2006 and 2007 by readers of the Cascadia Weekly and he received the 2007 Bellingham, Washington Mayor’s Arts Award in Literature. Ford is currently a speaker for Humanities Washington, an affiliate of the NEH, where he presents a program entitled, "Let's Talk About Race," around the state. Clyde has participated in hundreds of media interviews and has appeared on the Oprah Winfrey Show, New Dimensions Radio, and National Public Radio. He lives in Bellingham, Washington where he writes aboard his 30-foot trawler, and cruises the waters of the Inside Passage.

“an essential reckoning with the roots of the racial wealth gap in America.” — Publishers Weekly (starred review)

“A compelling argument for long-overdue reparations—though much more than that alone.” — Kirkus Reviews

“Ford’s forceful arguments and writing will compel readers to face the facts of the long history of exploitation and appropriation that have defined so much of America’s struggle with itself to give substance and meaning to its promise of 'freedom' for all.”
— Library Journal

(starred review) “Ford makes a clear case that the past is never over. The wounds inflicted by slavery have never healed, and he argues that they will continue to harm our country until we deal with them honestly. For many Americans, reading Of Blood and Sweat will be an excellent first step in that process.”