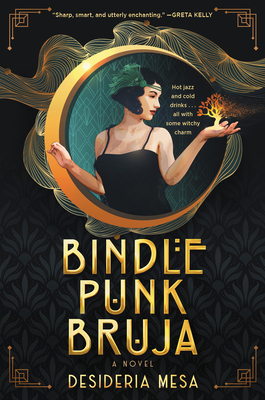 Boardwalk Empire meets The Vanishing Half with a touch of earth magic in this sexy and action-packed historical fantasy set in the luminous Golden Twenties from debut author Desideria Mesa, where a part-time reporter and club owner takes on crooked city councilmen, mysterious and deadly mobsters, and society’s deeply rooted sexism and racism, all while keeping her true identity and magical abilities hidden—inspired by an ancient Mexican folktale.

Luna—or depending on who’s asking, Rose—is the white-passing daughter of an immigrant mother who has seen what happens to people from her culture. This world is prejudicial, and she must hide her identity in pursuit of owning an illegal jazz club. Using her cunning powers, Rose negotiates with dangerous criminals as she climbs up Kansas City’s bootlegging ladder. Luna, however, runs the risk of losing everything if the crooked city councilmen and ruthless mobsters discover her ties to an immigrant boxcar community that secretly houses witches. Last thing she wants is to put her entire family in danger.

But this bruja with ever-growing magical abilities can never resist a good fight. With her new identity, Rose, an unabashed flapper, defies societal expectations all the while struggling to keep her true self and witchcraft in check. However, the harder she tries to avoid scrutiny, the more her efforts eventually capture unwanted attention. Soon, she finds herself surrounded by greed and every brand of bigotry—from local gangsters who want a piece of the action and businessmen who hate her diverse staff to the Ku Klux Klan and Al Capone. Will her earth magic be enough to save her friends and family? As much as she hates to admit it, she may need to learn to have faith in others—and learning to trust may prove to be her biggest ambition yet.

Desideria Mesa is often found getting lost in a historical, sci-fi, or high fantasy novel or crafting her own stories, of course. Aside from churning out novels, she enjoys writing songs, poetry, and short stories. Follow @DesideriaMesa on Twitter for writing discussion, slightly inappropriate jokes, and more information on her historical fantasy debut, BINDLE PUNK BRUJA.

"Mesa’s debut mixes a bit of Mexican folktale, a chunk of magical realism, and tons of period detail into a page-turning urban fantasy that takes the glitter of Boardwalk Empire and combines it with a story of found family, mob violence, and romance." — Library Journal (starred review)

“Bindle Punk Bruja is a book you will dive into, gorgeously addictive and impossible to put down. It will transport you through time to a 1920s world soaked in gin, glittering in gold and edged in danger. Luna is a hero with an indomitable will, navigating blood-soaked city streets with dark humor and cutting intelligence. Sharp, smart and utterly enchanting, Mesa’s debut is a triumph that stayed with me long after I turned the final page.”
— Greta Kelly, author of The Frozen Crown

"The friends and family surrounding Luna are a joy to meet...good flapper fun." — Kirkus Reviews