I Couldn't Love You More: A Novel (Paperback) 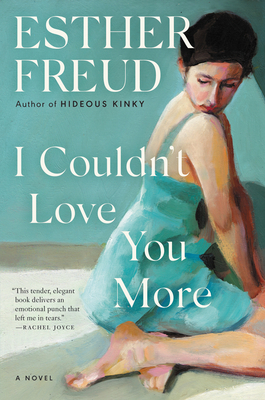 I Couldn't Love You More: A Novel (Paperback)

A sweeping story of three generations of women, crossing from London to Ireland and back again, and the enduring effort to retrieve the secrets of the past

It’s London, 1960, and Aoife Kelly—once the sparkling object of young men’s affections—runs pubs with her brusque, barking husband, Cash. Their courtship began in wartime London, before they returned to Ireland with their daughters in tow. One of these daughters—fiery, independent-minded Rosaleen—moves back to London, where she meets and begins an affair with the famous sculptor Felix Lehmann, a German-Jewish refugee artist over twice her tender eighteen years. When Rosaleen finds herself pregnant with Felix’s child, she is evicted from her flat, dismissed from her job, and desperate to hide the secret from her family. Where, and to whom, can she turn?

Meanwhile, Kate, another generation down, lives in present-day London with her young daughter and husband, an unsuccessful musician and destructive alcoholic. Adopted and floundering to find a sense of herself in the midst of her unhappy marriage, Kate sets out to track down her birth mother, a search that leads her to a Magdalene Laundry in Ireland and the harrowing history that it holds.

Stirring and nostalgic at moments, visceral and propulsive at others, I Couldn’t Love You More is a tender, candid portrait of love, sex, motherhood, and the enduring ties of family. It is impossible not to fall under the spell of this tale of mothers and daughters, wives and muses, secrets and outright lies.

Esther Freud is the great-granddaughter of Sigmund Freud and the daughter of the painter Lucian Freud. She trained as an actress before writing her first novel. Her books have been translated into thirteen languages. She lives in London.

"I Couldn’t Love You More is a stirring portrayal of motherly love and familial and institutional abuse through the eyes of three generations of Irishwomen. . . . A masterpiece." — Historical Novel Society

"This is such a powerful book—it unravels a deep tragedy in three miraculously entwined stories, in three different times, mothers and daughters linked by sorrow and love. It’s a gently told story of harsh, harsh events—a mystery story of separation and sorrow that is finally resolved with truth and warmth, but with no punches pulled. It’s a book about shame and the evil men do, but also about strength and the possibility of salvation in the face of one of the great scandals of the last century."  — Richard Curtis, screenwriter of Yesterday and Love Actually

"This exquisite family saga reads as a love letter between four generations of women. Everything is here; family ghosts, the bond between mothers and daughters, cruelty, endurance, the difficulty of love, and a faith in the possibility of healing - even after years of separation. This tender, elegant book delivers an emotional punch that left me in tears." — Rachel Joyce, author of The Unlikely Pilgrimage of Harold Fry and Miss Benson's Beetle

"Braiding the lives of mothers and daughters in England and Ireland across three generations, Freud explores the joys, heartbreaks, and aching enigmas of family bonds...Freud’s gifts for female empathy and fluid storytelling are fully evident in her ninth...the author’s insight is apparent, both in her character studies and expression, as the ambiguity of the book’s title demonstrates...A vivid, reliable saga of female experience." — Kirkus Reviews

"Beautiful and insightful...As Freud delves into the three women’s lives, the reader is taken on a journey of heartbreak as desperate actions taken to protect loved ones are revealed. This eloquent exploration of the ineffable ties between mothers and daughters delivers the goods." — Publishers Weekly (starred review)