The Escape Artist: The Man Who Broke Out of Auschwitz to Warn the World (Hardcover) 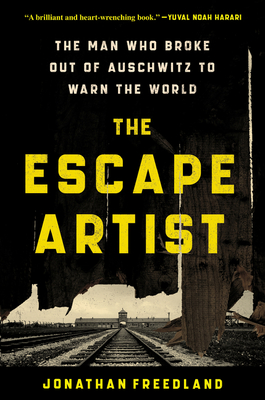 The Escape Artist: The Man Who Broke Out of Auschwitz to Warn the World (Hardcover)

A complex hero. A forgotten story. The first witness to reveal the full truth of the Holocaust . . .

Award-winning journalist and bestselling novelist Jonathan Freedland tells the incredible story of Rudolf Vrba—one of the very first Jews to break out of Auschwitz and make his way to freedom, a man determined to warn the world and pass on a truth too few were willing to hear—elevating him to his rightful place in the annals of World War II alongside Anne Frank, Primo Levi, and Oskar Schindler and casting a new light on the Holocaust and its aftermath.

In April 1944, Rudolf Vrba became one of the very first Jews to break out of Auschwitz and make his way to freedom—one of only a tiny handful who ever pulled off that near-impossible feat. He did it to reveal the truth of the death camp to the world—and to warn the last Jews of Europe what fate awaited them at the end of the railway line. Against all odds, he and his fellow escapee, Fred Wetzler, climbed mountains, crossed rivers and narrowly missed German bullets until they had smuggled out the first full account of Auschwitz the world had ever seen—a forensically detailed report that would eventually reach Franklin Roosevelt, Winston Churchill and the Pope.

And yet too few heeded the warning that Vrba—then just nineteen years old—had risked everything to deliver. Some could not believe it. Others thought it easier to keep quiet. Vrba helped save 200,000 Jewish lives—but he never stopped believing it could have been so many more.

This is the story of a brilliant yet troubled man—a gifted “escape artist” who even as a teenager understand that the difference between truth and lies can be the difference between life and death, a man who deserves to take his place alongside Anne Frank, Oskar Schindler and Primo Levi as one of the handful of individuals whose stories define our understanding of the Holocaust.

Journalist and broadcaster Jonathan Freedland is a weekly columnist for the Guardian, where he edits the paper’s op-ed pages and chairs its Editorial Board. He was previously the Guardian’s Washington correspondent. In 2014 he won the George Orwell Prize for Journalism. He lives in London with his wife and their two children. @Freedland.

“I thought I knew the Auschwitz story, but Freedland retells it from a fresh angle so powerfully that I read it with my heart beating fast, full of horror, rage, despair – and admiration for this potent demonstration of the stubborn resilience of the human spirit.”  — Tracy Chevalier, bestselling author of The Girl with the Pearl Earring

"Rudolf Vrba's life story not only meticulously recounts the truth, it also shows the unwillingness and inability of people to accept it. The past isn't over, and Jonathan Freedland's well-researched and compelling book is the irrefutable proof of that." — Roxane van Iperen, author of the New York Times bestselling The Sisters of Auschwitz

"A powerful story of one man’s resilience in the face of extreme evil and the price we pay when indifference rules our response." — Rosemary Sullivan, bestselling author of Stalin’s Daughter and The Betrayal of Anne Frank: A Cold Case Investigation

"This is not only an electrifying work of narrative history, it’s a gripping origin story. The command that we ‘Never Forget’ the Holocaust can rightfully be traced to a young man who exposed the horrors of Auschwitz by virtue of his extraordinary memory and tremendous bravery. As told by the gifted writer Jonathan Freedland, The Escape Artist is a story I’ll always remember.” — Mitchell Zuckoff, New York Times bestselling author of Fall and Rise and 13 Hours

"Rudi Vrba, a Slovakian teenager, got away from Auschwitz, one of only four Jews ever to survive an escape attempt, in order to alert the world to the horrors he witnessed there. Most of his intended recipients declined to read his stomach-churning report, didn’t believe it, or didn’t care. We have it within us to care now. I didn’t know Vrba’s name previously. I will remember it the rest of my life." — Melissa Fay Greene, prizewinning author of The Temple Bombing and Praying for Sheetrock

“A thrilling read, a piece of redemptive storytelling and a work of important Holocaust historical research ... a book that I couldn’t put down.” — Simon Sebag Montefiore

"If you think you know everything you need to know about the Holocaust, Jonathan Freedland's immersive, shattering, and, ultimately redemptive book, will come as a revelation. It's an epic of terror and endurance, personified by the history of a man who, in the deepest pit of hell, grasped that the greatest weapon that could be used against the Nazi Final Solution was the escape, not just of himself, but the truth. Written with Freedland's page-turning, gripping, hard-edged immediacy, The Escape Artist is profound in thought, boundless in humanity, an immediate modern classic in the literature of the ultimate atrocity." — Sir Simon Schama

"This is an indispensable, unflinching, bone-hard book. At one level the story of an audacious break-out, at another it tells of the inhuman methodology of the concentration camp as meticulously documented by a prisoner who had no time for rhetoric or sentimentality but who–tragically–found it harder to get the world to believe what he saw in Auschwitz than it was to escape from it. Compelling reading." — Howard Jacobson, author of the Man Booker Prize winning The Finkler Question

"Drawing on interviews with family members and former colleagues, Freedland presents a warts-and-all portrait of Vrba, and vividly captures the horrors of Auschwitz. The result is a noteworthy contribution to the history of the Holocaust." — Publisher's Weekly

"Freedland tells — with the verve of the best-selling novelist that he is — the story of Rudolf Vrba, the first Jew to successfully escape from Auschwitz. The narrative is extraordinary. In great and heart-stopping detail it tells of Vrba’s plan and how he executed it. It also explains why." — The Jewish Chronicle

"This isn’t a book just about Auschwitz, it’s also a deeply moving biography about Rudolf the man including his (entirely understandably) tempestuous and troubled life after the war. He died almost forgotten, and Freedland’s brilliant research and writing rightly resurrect him. His story must be told and read: a brave man who did his best to warn a world which wouldn’t listen." — Financial Times

“Concentration camp stories make for painful reading, but British journalist and broadcaster Freedland relates a riveting tale with a fascinating protagonist . . . Freedland delivers a gripping description of Vrba and a companion’s planning, breakout, and grueling walk to Slovakia . . . A powerful story of a true hero who deserves more recognition.” — Kirkus Reviews, starred review

“The Escape Artist by Jonathan Freedland is the incredible but little known story of Rudi Vrba, who escaped from Auschwitz and tried to warn the world, but whose warnings fell mostly on deaf ears. It’s an astonishing account, both of human brutality and resilience, and although it’s non-fiction, it reads like a thriller.” — C.J. Carey, author of Widowland

“[A] riveting and meticulous retelling of Vrba’s courageous and successful escape from Auschwitz and his valiant but failed attempt to sound the alarm about it . . . . While Vrba’s story has partially been told before, including in Claude Lanzmann opus Shoah, it has not until now been developed with the kind of detailed, primary-source research Freedland has conducted.” — The Washington Examiner

“Freedland, a journalist who also writes thrillers under the pseudonym Sam Bourne, is the perfect person to tell Rosenberg’s story: he’s got a journalist’s eye for precise detail and a novelist’s sense of pacing and suspense. Like Neal Bascomb’s The Escape Artists (2018) and Margalit Fox’s The Confidence Men (2021), this spellbinding book tells the kind of true story that, if it were the basis of a work of fiction, might be considered unbelievable.” — Booklist

“Raw and gripping . . . [a] compelling portrait of this neglected hero of Holocaust resistance leaves an inescapable imprint of a past now in danger of being minimized or forgotten. . . . It’s time to honor him for the incredible feat that helped save so many Jewish lives from Nazi extermination.” — Wall Street Journal

"Excellent . . . thrilling . . . Freedland's book is rich in the kind of details that haunt you long after you have turned the last page." — The Sunday Times (UK)

"The author Jonathan Freedland . . . takes a fascinating story about an important if forgotten man in history—and he keeps the story from becoming one dimensional. Vrba was indeed a hero, but much of his effort to warn the world fell on deaf ears. And Vrba was himself a man of contradictions. I enjoyed this book immensely. And I was moved by it. I would not be surprised if it becomes a best seller." — Amazon Book Review

“We know about Auschwitz. We know what happened there. But Freedland, with his strong, clear prose and vivid details, makes us feel it . . . . The Escape Artist is riveting history, eloquently written, and scrupulously researched.” — Minneapolis Star Tribune

“As World War II recedes further into the past, Jonathan Freedland has revived one story from the Holocaust that’s both historically significant and a riveting read. Freedland, the author of several thrillers and a correspondent for The Guardian, writes with a novelist’s verve to tell the story of Rudolf Vrba, the first Jewish person to escape from Auschwitz . . . . The Escape Artist vividly brings his story to a new generation of readers.” — BookPage

“Freedland enthusiastically makes his informal retelling of this story of a daring escape from a horror on an unimaginable scale a particular tale of high adventure.” — New York Journal of Books

“Riveting . . . . The Escape Artist includes harrowing details about Auschwitz that still have the power to shock. But the reactions to Vrba’s testimony by those in power—ranging from lack of interest to outright antisemitism—are nearly as horrifying. . . . The next time an abyss yawns before us—whether it be in Kyiv or in Washington, D.C.—we owe it to them to stare into it." — New York Times

“Compelling and vivid . . . . With painstaking detail, [Freedland] uncovers the humanity in one of the Shoah’s great witnesses but also brings Vrba’s truth about Nazi inhumanity to a new audience in a riveting, accessible way. It’s a weighty but sharp tale that should become one of the most stunning texts on required high school reading lists of the future.” — The Forward