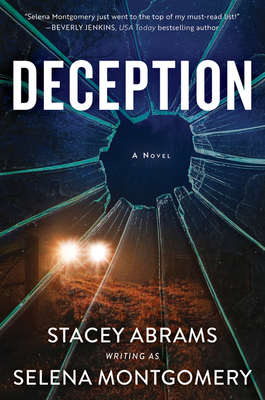 New York Times bestselling author and political leader Stacey Abrams, writing under her pen name Selena Montgomery, delivers a gripping story of a woman forced to play the hand life dealt and the FBI agent who calls her bluff.

Playing the odds has always been Fin Borders’ forte. As a professional poker player, she knows when to get out to keep from losing everything. But an innocent woman has been accused of murder, and to help, Fin will have to go back to the small southern town of her birth. It’s a place she’s been running from her entire life, a place of violence, where she got by with nothing more than her wits. Returning to Hallden, Georgia, means facing the ghosts of a brutal crime that Fin will never forget.

But Fin isn’t the only one in Hallden hunting for a killer. FBI Special Agent Caleb Matthews is deep undercover, hiding his true identity and his own desperate history. Working alone is far too dangerous, so he and Fin must learn to trust each other. But as they grow closer, they are unprepared for the shocking deception that could destroy everything they hold dear.

Selena Montgomery is the nom de plume of Stacey Abrams. After serving for eleven years in the Georgia House of Representatives, she became the first Black woman to become the gubernatorial nominee for a major party in the United States, and was the first Black woman and first Georgian to deliver a Response to the State of the Union. In 2021, she received the inaugural Social Justice Impact Award from the NAACP Image Awards.

Stacey is an avid fan of television and movies, with a penchant for sci-fi, car chases and heists. A bibliophile, her recent favorites range from Colson Whitehead, Robert Caro and Nora Roberts to N.K. Jemison, Rebecca Roanhorse and Haruki Marukami.

As Selena Montgomery, she is an award-winning author of eight romantic suspense novels.

“[In] her latest sexy thriller...the sparks—both romantic and ballistic—don’t disappoint. Montgomery has a winning pair in morally flexible Sebastian and principled Kat, and the tropical gauntlet she runs them through is twisty and satisfying.”  — Publishers Weekly on Secrets and Lies

“[Never Tell] will keep you reading late into the night. This compelling story is an amazing combination of emotion, suspense and drama.”
— Romantic Times

“A taut, spine tingling story, Never Tell will please Ms. Montgomery’s fans and gain her many more.” — Romance in Color