Pickleball Is Life: The Complete Guide to Feeding Your Obsession (Hardcover) 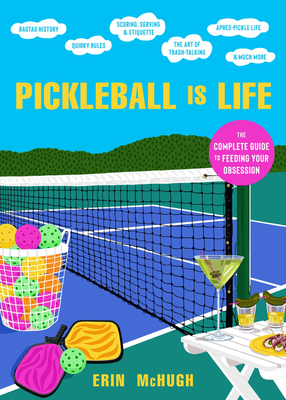 Pickleball Is Life: The Complete Guide to Feeding Your Obsession (Hardcover)

The ultimate keepsake for every pickleball fan—from a dink shot to the kitchen, everything a pickleballer needs to know in this fully illustrated guide to the world’s greatest recreational sport, packed with lots of joy, good humor, and even a little bit of wisdom.

Pickleball is the fastest growing sport in America. Easy to learn, but impossible to master, it’s no wonder that nearly 5 million people nationwide have picked up their paddles and taken to the court. But people aren’t just dabbling in this up-and-coming activity, they are obsessed; some hit the court as many as five, six, even seven times a week. As Vanity Fair put it, pickleball has “won over everyone, from Leonardo DiCaprio to your grandparents.”

Pickleball Is Life is the first book of its kind celebrating the weird and wonderful world of pickleball. It will take readers on a journey from the sport’s quirky origins to its modern-day cult following. Along the way, visual info graphs and illustrations will share even more pickleball knowledge, including etiquette tips, a DIY court, obscure rules, and pointers for (good-natured) trash talk. Also included are interviews with members of the three founding families from Bainbridge Island who are still very much involved in the sport and its growth.

People of all ages, athletic abilities, and backgrounds have fallen in love with pickleball. Sure, it’s a good workout, but it’s also a cheerful way to interact with others—something folks crave now more than ever. So, whether they’re uninitiated or obsessed, this book will help readers find even more to love about the world’s greatest sport.

Erin McHugh is a former publishing industry executive and the author of many books of humor, inspiration, history, and more. A devoted pickleballer, she lives in South Dartmouth, Massachusetts.