We Could Be So Good: A Novel (Paperback) 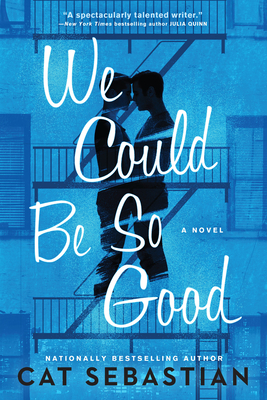 We Could Be So Good: A Novel (Paperback)

Colleen Hoover meets The Seven Husbands of Evelyn Hugo in this mid-century romdram about a scrappy reporter and a newspaper mogul’s son—perfect for Newsies shippers.

Nick Russo has worked his way from a rough Brooklyn neighborhood to a reporting job at one of the city’s biggest newspapers. But the late 1950s are a hostile time for gay men, and Nick knows that he can’t let anyone into his life. He just never counted on meeting someone as impossible to say no to as Andy.

Andy Fleming’s newspaper-tycoon father wants him to take over the family business. Andy, though, has no intention of running the paper. He’s barely able to run his life—he’s never paid a bill on time, routinely gets lost on the way to work, and would rather gouge out his own eyes than deal with office politics. Andy agrees to work for a year in the newsroom, knowing he’ll make an ass of himself and hate every second of it.

Except, Nick Russo keeps rescuing Andy: showing him the ropes, tracking down his keys, freeing his tie when it gets stuck in the ancient filing cabinets. Their unlikely friendship soon sharpens into feelings they can’t deny. But what feels possible in secret—this fragile, tender thing between them—seems doomed in the light of day. Now Nick and Andy have to decide if, for the first time, they’re willing to fight.

Cat Sebastian has written sixteen queer historical romances. Cat’s books have received starred reviews from Kirkus, Publishers Weekly, Library Journal, and Booklist. Before writing, Cat was a lawyer and a teacher and did a variety of other jobs she liked much less than she enjoys writing happy endings for queer people. She was born in New Jersey and lived in New York and Arizona before settling down in a swampy part of south. When she isn’t writing, she’s probably reading, having one-sided conversations with her dog, or doing the crossword puzzle.

“In Sebastian’s work...the right to love and be loved as we are is a compass that always points toward justice.”  — New York Times Book Review

“From its brilliantly crafted opening…to its blissfully romantic conclusion, everything about Sebastian’s latest…is perfectly on-point.”  — Booklist (starred review) on The Perfect Crimes of Marian Hayes

“An irresistible story of love and adventure that will delight both newcomers and regular readers of queer romance.”  — Kirkus Reviews (starred review) on The Queer Principles of Kit Webb

“Cat Sebastian is one of my favorite writers in romance or any other genre.” — Olivia Dade, author of Spoiler Alert

"If you haven’t read Cat Sebastian, what are you waiting for?” — Lorraine Heath, New York Times bestselling author

“Cat Sebastian’s writing is a pure joy to read—it’s engaging, romantic, witty and positive. Reading one of her books always leaves me with a smile on my face and a warm, happy feeling in my heart.” — Avon Gale, author of the Scoring Chances series