Inviting Disaster: Lessons From the Edge of Technology (Paperback) 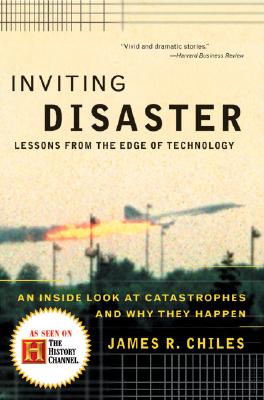 Inviting Disaster: Lessons From the Edge of Technology (Paperback)


Not On Our Shelves—Ships in 1-5 Days
Combining captivating storytelling with eye-opening findings, Inviting Disaster delves inside some of history's worst catastrophes in order to show how increasingly "smart" systems leave us wide open to human tragedy.

Weaving a dramatic narrative that explains how breakdowns in these systems result in such disasters as the chain reaction crash of the Air France Concorde to the meltdown at the Chernobyl Nuclear Power Station, Chiles vividly demonstrates how the battle between man and machine may be escalating beyond manageable limits -- and why we all have a stake in its outcome.

Included in this edition is a special introduction providing a behind-the-scenes look at the World Trade Center catastrophe. Combining firsthand accounts of employees' escapes with an in-depth look at the structural reasons behind the towers' collapse, Chiles addresses the question, Were the towers "two tall heroes" or structures with a fatal flaw?

James R. Chiles began writing about technology and history while a student at the University of Texas Law School. His first piece was a 1979 Texas Monthly article on the Pantex nuclear weapons assembly plant in Amarillo, Texas. He began writing features for Smithsonian in 1983, and since that time has published features and cover stories there and in Audubon, Air & Space, Harvard magazine, and American Heritage of Invention & Technology. He lives in Minnesota.