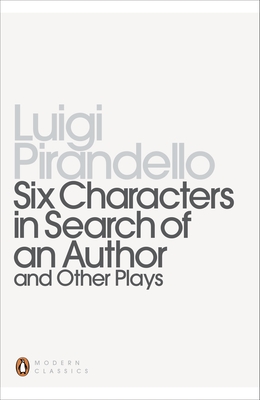 
Special Order—Subject to Availability
A volume of plays from the founding architect of twentieth-century drama, including his most popular and controversial work

Pirandello is brilliantly innovatory in his forms and themes, and in the combined energy, imagination and visual colours of his theatre. This volume of plays, translated from the Italian by Mark Musa, opens with Six Characters in Search of an Author, in which six characters invade the stage and demand to be included in the play. The tragedy Henry IV dramatizes the lucid madness of a man who may be King. In So It Is (If You Think So), the townspeople exercise a morbid curiosity attempting to discover “the truth” about the Ponza family. Each of these plays can lay claim to being Pirandello’s masterpiece, and in exploring the nature of human personality, each one stretches the resources of drama to their limits.

For more than seventy years, Penguin has been the leading publisher of classic literature in the English-speaking world. With more than 1,800 titles, Penguin Classics represents a global bookshelf of the best works throughout history and across genres and disciplines. Readers trust the series to provide authoritative texts enhanced by introductions and notes by distinguished scholars and contemporary authors, as well as up-to-date translations by award-winning translators.
Luigi Pirandello (1867–1936) was born of rich, middle-class parents in Girgenti (Agrigento), Sicily. As a young man he studied at the Universities of Palermo, Rome, and Bonn, where he gained his doctorate in 1891. His first published work, Mal giocondo (1889), was a collection of poems. It was followed by other volumes of poems, critical essays, novels, short stories, and over forty plays. In 1894 he married Antoinetta Portulano, the daughter of his father’s business associate. Financial disaster and a severe illness brought on by the birth of their third child drove his wife to a hysterical form of insanity. Only in 1918, when her presence in the family constituted a real threat to their daughter’s safety did Pirandello agree to have his wife committed to an asylum. The enormous emotional strain he felt at this time is reflected in the intense pessimism found in his work. Pirandello’s first real success in the theatre came about in 1921 when Six Characters in Search of an Author was performed. Henry IV followed the next year and confirmed his position as a playwright. In the following years Pirandello travelled abroad extensively. He embarked on a career as a producer and in 1925 founded his Art Theatre in Rome. He was awarded the Nobel Prize for Literature in 1934 and died in Rome.

Mark Musa (1934–2014) was a professor at the Center for Italian Studies at Indiana University. A former Fulbright and Guggenheim Fellow, Musa authored a highly acclaimed translation of Dante’s Divine Comedy.
By the Winner of the Nobel Prize in Literature

“The essence of Pirandello is not his intellectuality. It is his conversion of the intellect into passion.” —Eric Bentley