The History of the Peloponnesian War: Revised Edition (Paperback) 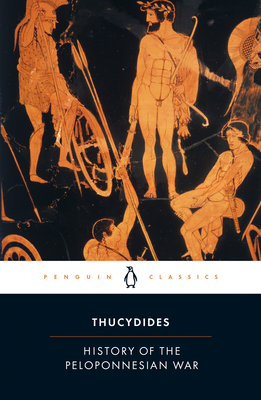 The History of the Peloponnesian War: Revised Edition (Paperback)


Not On Our Shelves—Ships in 1-5 Days
Written four hundred years before the birth of Christ, this detailed contemporary account of the struggle between Athens and Sparta stands an excellent chance of fulfilling the author's ambitious claim that the work "was done to last forever." The conflicts between the two empires over shipping, trade, and colonial expansion came to a head in 431 b.c. in Northern Greece, and the entire Greek world was plunged into 27 years of war. Thucydides applied a passion for accuracy and a contempt for myth and romance in compiling this exhaustively factual record of the disastrous conflict that eventually ended the Athenian empire.

For more than seventy years, Penguin has been the leading publisher of classic literature in the English-speaking world. With more than 1,700 titles, Penguin Classics represents a global bookshelf of the best works throughout history and across genres and disciplines. Readers trust the series to provide authoritative texts enhanced by introductions and notes by distinguished scholars and contemporary authors, as well as up-to-date translations by award-winning translators.
Thucydides (c. 460 BC–400 BC) was a general who was exiled for his failure to defend the Greek city of Amphipolis in Thrace. During his exile, he began compiling histories and accounts of the war from various participants.

Rex Warner was a Professor of the University of Connecticut from 1964 until his retirement in He was born in 1905 and went to Wadham College, Oxford, where he gained a "first" in Classical Moderations, and took a degree in English Literature. He taught in Egypt and England, and was Director of the British Institute, Athens, from 1945 to 1947. He has written poems, novels and critical essays, has worked on films and broadcasting, and has translated many works, of which Xenophon’s History of My Time and The Persian Expedition, Thucydides’ The Peloponnesian War, and Plutarch’s Lives (under the title Fall of the Roman Republic) and Moral Essays have been published in Penguin Classics.

M. I. Finley was a professor of ancient history and master of Darwin College, Cambridge. He died in 1986.