The Penguin Book of the Sonnet: 500 Years of a Classic Tradition in English (Paperback) 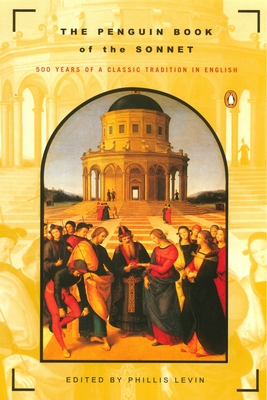 The Penguin Book of the Sonnet: 500 Years of a Classic Tradition in English (Paperback)


On Our Shelves Now at:
A unique anthology celebrating that most vigorous of literary forms--the sonnet

The sonnet is one of the oldest and most enduring literary forms of the post-classical world, a meeting place of image and voice, passion and reason, elegy and ode. It is a form that both challenges and liberates the poet.

For this anthology, poet and scholar Phillis Levin has gathered more than 600 sonnets to tell the full story of the sonnet tradition in the English language. She begins with its Italian origins; takes the reader through its multifaceted development from the Elizabethan era to the Romantic and Victorian; demonstrates its popularity as a vehicle of protest among writers of the Harlem Renaissance and poets who served in the First World War; and explores its revival among modern and contemporary poets. In her vibrant introduction, Levin traces this history, discussing characteristic structures and shifting themes and providing illuminating readings of individual sonnets. She includes an appendix on structure, biographical notes, and valuable explanatory notes and indexes. And, through her narrative and wide-ranging selection of sonnets and sonnet sequences, she portrays not only the evolution of the form over half a millennium but also its dynamic possibilities.

Phillis Levin's poems have appeared in many publications and anthologies. She is author of the Norma Farber First Book Award-winning Temples and Fields, as well as The Afterimage. Phillis Levin is also the recipient of an Amy Lowell Poetry Travelling Scholarship, an Ingram Merrill Grant, and a Fulbright Fellowship to Slovenia, and has been a fellow at The MacDowell Colony and Yaddo. She lives in New York City and currently teaches in the M.A. program in Creative Writing at Hofstra University.