The Book of Magic: From Antiquity to the Enlightenment (Paperback) 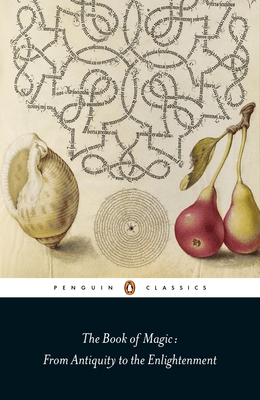 The Book of Magic: From Antiquity to the Enlightenment (Paperback)


On Our Shelves Now at:
A rich, wondrous anthology of the Western magical tradition, from the Old Testament to Doctor Faustus and Paradise Lost, now in a Penguin Classics black spine edition

“. . . as when iron is drawn to a magnet, camphor is sucked into hot air, crystal lights up in the Sun, sulfur and a volatile liquid are kindled by flame, an empty eggshell filled with dew is raised towards the Sun . . .”

The Bible is full of stories featuring forms of magic and possession—from Moses battling with Pharaoh’s wizards to the supernatural actions of Jesus and his disciples. As, over the following centuries, the Christian church attempted to stamp out “deviant” practices, a persistent interest in magic drew strength from this Biblical validation. A strange blend of mumbo-jumbo, fear, fraud, and deeply serious study, magic was at the heart of the European Renaissance, fascinating many of its greatest figures.

This is a book filled with incantations, charms, curses, summonings, cures, and descriptions of extraordinary, shadowy, only half-understood happenings from long ago. It features writers as various as Thomas Aquinas, John Milton, John Dee, Ptolemy, and Paracelsus along with anonymous ancient and medieval works that were, in some cases, viewed as simply too dangerous even to open.

The Book of Magic will be welcomed by everyone from those with the most casual interest in the magical tradition to anyone drawn to the Renaissance and the tangled, arcane roots of the scientific tradition.

For more than seventy years, Penguin has been the leading publisher of classic literature in the English-speaking world. With more than 1,700 titles, Penguin Classics represents a global bookshelf of the best works throughout history and across genres and disciplines. Readers trust the series to provide authoritative texts enhanced by introductions and notes by distinguished scholars and contemporary authors, as well as up-to-date translations by award-winning translators.
Brian Copenhaver is a professor of philosophy and history at the University of California, Los Angeles, and is one of the world’s foremost scholars on Renaissance magic and mysticism.
“Impressive and well-edited . . . Reading this rich collection allows each of us to cut our own path through the dense snarls of the history of a body of ideas.” —The Times Literary Supplement