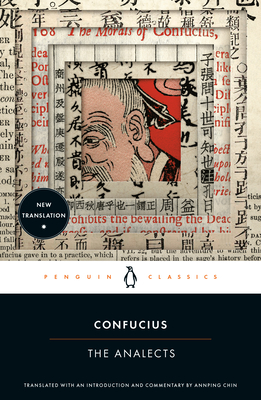 
Special Order—Subject to Availability
One of the most influential books in human history, in a revelatory new translation

The book that the Chinese have returned to repeatedly for reflection, renewal, and validation of their own views, The Analects was compiled by the disciples of Confucius, China’s earliest teacher and moral thinker, from his remarks and his conversations with rulers, political operators, and people he happened to meet. It laid the foundation of the Chinese idea of what is moral and what is politically viable, what is a good government and who has integrity.

Featuring both the English and Chinese texts, this new translation, by one of the pre-eminent scholars of Confucius, draws on the most recent excavated manuscripts and centuries of scholarship to illuminate the historical context of Confucius’ teachings, explaining who the many local figures referenced are, and navigating a rich tradition of commentaries. The result is a map of Confucian thought that brings us as close as possible to experiencing Confucius as his followers might have 2,500 years ago.

For more than seventy years, Penguin has been the leading publisher of classic literature in the English-speaking world. With more than 1,700 titles, Penguin Classics represents a global bookshelf of the best works throughout history and across genres and disciplines. Readers trust the series to provide authoritative texts enhanced by introductions and notes by distinguished scholars and contemporary authors, as well as up-to-date translations by award-winning translators.
Confucius (551–479 B.C.) was a philosopher, a political figure, an educator, and the founder of one of the major schools of thought in Chinese history.

Annping Chin is a senior lecturer in the history department at Yale and is the author of The Authentic Confucius: A Life of Thought and Politics and a coauthor, with Jonathan Spence, of The Chinese Century: A Photographic History of the Last Hundred Years. She lives in New Haven, Connecticut.
“For more than two millennia, the teachings of Confucius have served as a guide for a substantial portion of humanity. English-language readers seeking to understand this remarkable body of thought are fortunate to have Annping Chin’s highly readable and judiciously annotated edition of The Analects.” —Henry A. Kissinger

“An astonishingly lucid exposition of The Analects. A kind of serene insight pervades the commentaries.” —Harold Bloom

“An incomparable new volume that combines a fresh and sympathetic translation with a wonderfully readable annotation. It is a joy to use and will unlock a whole new level of meaning for English-language readers.” —Orville Schell, Director of the Center on U.S.-China Relations and co-author of Wealth and Power: China’s Long March to the Twenty-First Century