Inside Money: Brown Brothers Harriman and the American Way of Power (Paperback) 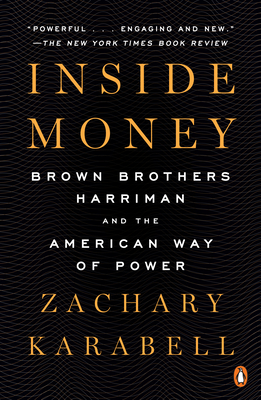 Inside Money: Brown Brothers Harriman and the American Way of Power (Paperback)


In Stock—Click for Locations
A sweeping history of the legendary private investment firm Brown Brothers Harriman, exploring its central role in the story of American wealth and its rise to global power

Conspiracy theories have always swirled around Brown Brothers Harriman, and not without reason. Throughout the nineteenth century, when America was convulsed by a devastating financial panic essentially every twenty years, Brown Brothers quietly went from strength to strength, propping up the U.S. financial system at crucial moments and catalyzing successive booms, from the cotton trade and the steamship to the railroad, while largely managing to avoid the unwelcome attention that plagued some of its competitors. By the turn of the twentieth century, Brown Brothers was unquestionably at the heart of what was meant by an American Establishment. As America's reach extended beyond its shores, Brown Brothers worked hand in glove with the State Department, notably in Nicaragua in the early twentieth century, where the firm essentially took over the country's economy. To the Brown family, the virtue of their dealings was a given; their form of muscular Protestantism, forged on the playing fields of Groton and Yale, was the acme of civilization, and it was their duty to import that civilization to the world. When, during the Great Depression, Brown Brothers ensured their strength by merging with Averell Harriman's investment bank to form Brown Brothers Harriman, the die was cast for the role the firm would play on the global stage during World War II and thereafter, as its partners served at the highest levels of government to shape the international system that defines the world to this day.

In Inside Money, acclaimed historian, commentator, and former financial executive Zachary Karabell offers the first full and frank look inside this institution against the backdrop of American history. Blessed with complete access to the company's archives, as well as a thrilling understanding of the larger forces at play, Karabell has created an X-ray of American power--financial, political, cultural--as it has evolved from the early 1800s to the present. Today, unlike many of its competitors, Brown Brothers Harriman remains a private partnership and a beacon of sustainable capitalism, having forgone the heady speculative upsides of the past thirty years but also having avoided any role in the devastating downsides. The firm is no longer in the command capsule of the American economy, but, arguably, that is to its credit. If its partners cleaved to any one adage over the generations, it is that a relentless pursuit of more can destroy more than it creates.
Zachary Karabell was educated at Columbia, Oxford, and Harvard, where he received his PhD. He is a prolific commentator, both in print and on television, and the author of a dozen previous books, including The Last Campaign, which won the Chicago Tribune's Heartland Prize, and The Leading Indicators. He is also a longtime investor, former financial services executive, and the founder of the Progress Network.
“Powerful . . . There is something quietly stirring in the tale of Alexander Brown, a Belfast linen merchant who emigrated to Baltimore in 1800, and together with his four sons became, first, a major linen importer, then a dealer in cotton, coffee, copper, iron and sugar, then a financier. Karabell, the author of several books on business and history, uses Brown Brothers as a lens into the nation’s growth . . . His narrative of a firm that remained private and true to its credo is engaging and new.” —New York Times Book Review

“An engaging history . . . Karabell, who has worked in banking himself, tells a brisk and muscular story.” —Robert Armstrong, The Financial Times

“Karabell tells the tale with vigour, bringing the leading characters to life while locating their exploits in America’s broader economic and political history. He does not shy away from darker episodes, acknowledging the cotton traders’ dependence on the labour of slaves, and exposing the casual antisemitism of some partners.” —Reuters

“[Inside Money is] a book worth reading for anyone interested in the history of Wall Street, a well-told tale of how American finance evolved from a relative backwater into the collateralized colossus it is today.” —Forbes

“Inside Money can be read as a rather convincing declension narrative of the 20th-century U.S. establishment, financiers, and foreign-policy mavens alike.” —Foreign Policy

“Karabell provides as good a discussion of the ‘dollar diplomacy’ and corporatism that defined that era as any I have read. These are complex ideas and a deeply challenging part of U.S. history. The blending of corporate and national interests in the late 19th and early 20th century—a blending that led U.S. soldiers to literally die to protect the financial interests of the Brown family of bankers—is a valuable perspective through which we can view our present foreign entanglements.” —American Banker

“Historian Karabell examines the long history of a financial services firm that exercised outsize power in the political sphere. . . . Karabell digs deep into the history of the intertwined firm, sometimes revealing uncomfortable truths, such as Brown Brothers’ deep involvement in the Southern cotton economy and thus implication in the institution of slavery. In the balance, however, the more important story is the wedding of American money to global power. . . . A readable, unfailingly interesting study in the making of the American century.” —Kirkus

“Extensively well-researched . . . The history of American capitalism is intricately intertwined with the evolution of the private investment firm Brown Brothers Harriman . . . Karabell had full access to the company’s archives and has produced the first comprehensive inside story of Brown Brothers Harriman and the people behind it. A long overdue history.” —Library Journal (starred review)

“Brown Brothers Harriman has weathered wars, banking panics, and stock market crashes by following Alexander Brown’s advice to his sons, including ‘avoid unnecessary risks,’ don’t trade with ‘unvetted partners,’ and ‘be known as someone whom others could trust.’ . . .  Karabell draws an illuminating contrast between Brown Brothers Harriman and behemoths such as Chase and Goldman Sachs. Fans of business history will be rapt.” —Publishers Weekly

“With judicious insight and a flair for storytelling, Zachary Karabell has made an immense contribution to understanding money and power in America, and globally. In this history of Brown Brothers Harriman we can chart the often-porous relationship between governance and capital at a time when both are under renewed stress and strain. Karabell’s achievement is to give us the human story of seemingly abstract forces—and anyone who aspires to understand what Henry Luce called ‘the American Century’ and beyond will find Karabell’s lucid and compelling book to be essential reading.” —Jon Meacham

“Inside Money is a history of American capitalism with an unusual and welcome slant. Suppose the gospel of wealth included the idea of ‘enough’? That partners in a firm could choose relationships over ever more riches? That greed be subordinated to trust and integrity? Brown Brothers Harriman still has much to answer for, but its story tells us a great deal about the emergence of the winner-take-all world.” —Anne-Marie Slaughter, CEO New America

“Inside Money is the sweeping and storied history of Brown Brothers Harriman, one of the great Wall Street firms, which came to embody that distinctive marriage of money and power that marked the “American Century.” With his unique talents as a historian and one of our liveliest writers on finance, Zachary Karabell has crafted a wonderfully engrossing narrative, full of fascinating historical insights about the American elite at the height of its global influence.” —Liaquat Ahamed, Pulitzer Prize-winning author of Lords of Finance

“Zachary Karabell understands both money and American history. Here he weaves them together in a fascinating story that reads like a good multi-generational novel.” —Joseph Nye, professor at Harvard and author of Do Morals Matter? Presidents and Foreign Policy from FDR to Trump

“A captivating secret history of the rise of the American way of capitalism through the story of one powerful and insular family firm, Inside Money reminds us that a dominant caste’s sense of noblesse oblige conceals many ironies and much self-interest, but they knew when enough was enough and when private interest needed to give way to the public good.” —Dambisa Moyo, economist and author of Edge of Chaos

“Zachary Karabell's Inside Money is a monumental history of behemoth investment firm Brown Brothers Harriman. Whether dealing with Wall Street intrigue or Big Railroad power or financial booms-and-busts, Karabell proves to be a master of his trade. It's impossible to understand how America became such a global power without reading this superb book. Highly recommended!” —Douglas Brinkley, Katherine Tsanoff Brown Chair in Humanities and Professor of History at Rice University and author of American Moonshot: John F. Kennedy and the Great Space Race

“With his customary elegance and acuity, Karabell tells the engrossing story of one of America’s most storied private banks, whose quiet influence did much to define the international system that took shape after World War II and endures, if perilously, to this day. A luminous work of history.” —Fredrik Logevall,  Harvard University, author of JFK: Coming of Age in the American Century, 1917-1956