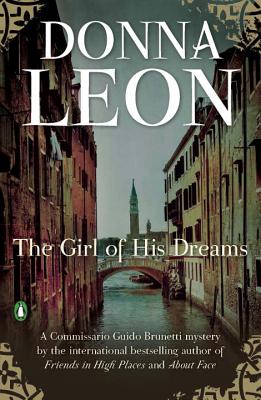 This is book number 16 in the A Commissario Guido Brunetti Mystery series.

Donna Leon’s Commissario Guido Brunetti mysteries have won legions of fans for their evocative portraits of Venetian life. In her novels, home-cooked food, family, renaissance art, Italian history, and local politics play as central a role as an unsolved crime. The Girl of His Dreams opens with a major event in Brunetti’s family, and keeps the theme of family close to the fore.

When a friend of Guido Brunetti’s brother, a priest recently returned from years of missionary work in Africa, calls on the Commissario with a request, Brunetti suspects the man has hidden motives. An American-style Christian sect has begun meeting in private homes in the city, and it’s possible the priest is merely apprehensive of the competition. Nevertheless, Brunetti and his wife, Paola, decide to go undercover. But when a girl’s body is found floating in a canal, Brunetti must put everything aside to investigate the secretive world of her people, the gypsies, who exist on the fringes of society. Thought provoking, eye opening, and profoundly moving, The Girl of His Dreams is classic Donna Leon—and a spectacular, heart-wrenching addition to the series.

“A showcase of nuanced characterization, acute observation and seamless plotting.”—The Washington Post
A New Yorker of Irish/Spanish descent, Donna Leon first went to Italy in 1965, returning regularly over the next decade or so while pursuing a career as an academic in the States and then later in Iran, China and finally Saudi Arabia. It was after a period in Saudi Arabia, which she found ‘damaging physically and spiritually’ that Donna decided to move to Venice, where she has now lived for over twenty years.

Her debut as a crime fiction writer began as a joke: talking in a dressing room in Venice’s opera-house La Fenice after a performance, Donna and a singer friend were vilifying a particular German conductor. From the thought ‘why don’t we kill him?’ and discussion of when, where and how, the idea for Death at La Fenice took shape, and was completed over the next four months.

Donna Leon is the crime reviewer for the London Sunday Times and is an opera expert. She has written the libretto for a comic opera, entitled Dona Gallina. Set in a chicken coop, and making use of existing baroque music, Donna Gallina was premiered in Innsbruck. Brigitte Fassbaender, one of the great mezzo-sopranos of our time, and now head of the Landestheater in Innsbruck, agreed to come out of retirement both to direct the opera and to play the part of the witch Azuneris (whose name combines the names of the two great Verdi villainesses Azucena and Amneris).