Black Milk: On the Conflicting Demands of Writing, Creativity, and Motherhood (Paperback) 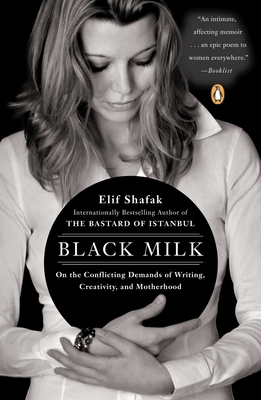 Black Milk: On the Conflicting Demands of Writing, Creativity, and Motherhood (Paperback)


Special Order—Subject to Availability
A thoughtful and incisive meditation on literature, motherhood, and spiritual wellbeing from the author of The Island of Missing Trees (a Reese's Book Club Pick)

After the birth of her first child, Elif Shafak experienced a profound personal crisis. Plagued by guilt, anxiety, and bewilderment about her new maternal role, the acclaimed novelist stopped writing for the first time in her life. As she plummeted into post-partum depression, Shafak looked to the experiences of other prominent female writers—including Sylvia Plath, Virginia Woolf, Simone de Beauvoir, and Alice Walker—for help navigating the conflict between motherhood and artistic creation in a male-dominated society. Searingly honest, eloquent, and unexpectedly humorous, Black Milk will be widely embraced by writers, academics, and anyone who has undergone the identity crisis engendered by being a mother.
Elif Shafak is an award-winning British-Turkish novelist and a champion of women’s rights and freedom of expression. Her books have been translated into fifty-five languages. Her novels include The Bastard of Istanbul, The Forty Rules of Love, The Architect’s Apprentice, Three Daughters of Eve, 10 Minutes 38 Seconds in This Strange World, which was a finalist for the 2019 Booker Prize, and, most recently, The Island of Missing Trees, which is a November 2021 Reese Witherspoon Book Club Pick. She is also the author of a memoir, Black Milk: On the Conflicting Demands of Writing, Creativity, and Motherhood. An active political commentator, columnist, and public speaker, she lives in London. Her website is elifshafak.com.