Dolls! Dolls! Dolls!: Deep Inside Valley of the Dolls, the Most Beloved Bad Book and Movie of All Time (Paperback) 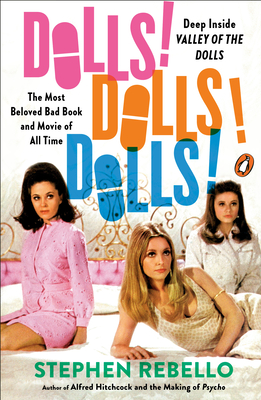 Dolls! Dolls! Dolls!: Deep Inside Valley of the Dolls, the Most Beloved Bad Book and Movie of All Time (Paperback)


Not On Our Shelves—Ships in 1-5 Days
"A blissful treasure trove of gossipy insider details that Dolls fans will swiftly devour."
--Kirkus Reviews

The unbelievable-but-true, inside story of Jacqueline Susann's pop culture icon Valley of the Dolls--the landmark novel and publishing phenomenon, the infamous smash hit film ("the best worst movie ever made"), and Dolls's thriving legacy today

Since its publication in 1966, Jacqueline Susann's Valley of the Dolls has reigned as one of the most influential and beloved pieces of commercial fiction. Selling over thirty-one million copies worldwide, it revolutionized overnight the way books got sold, thanks to the tireless and canny self-promoting Susann. It also generated endless speculation about the author's real-life models for its larger-than-life characters. Turned in 1967 into an international box-office sensation and morphing into a much-beloved cult film, its influence endures today in everything from films and TV shows to fashion and cosmetics tributes and tie-ins. Susann's compulsive readable exposé of three female friends finding success in New York City and Hollywood was a scandalous eye-opener for its candid treatment of sex, naked ambition, ageism, and pill-popping, and the big screen version was one of the most-seen and talked-about movies of the time.

Dolls! Dolls! Dolls! digs deep into the creation of that hugely successful film--a journey nearly as cut-throat, sexually-charged, tragic, and revelatory as Susann's novel itself--and uncovers how the movie has become a cherished, widely imitated camp classic, thanks to its over-the-top performances, endlessly quotable absurd dialogue, outré costumes and hairdos, despite the high aspirations, money, and talent lavished on it. Screenwriter-journalist-film historian Stephen Rebello has conducted archival research and new interviews to draw back the velvet curtain on the behind-the-scenes intrigue, feuds and machinations that marked the film's production. In doing so, he unveils a rich, detailed history of fast-changing, late 1960s Hollywood, on screen and off.
Stephen Rebello is a screenwriter and author of the bestselling Alfred Hitchcock and the Making of 'Psycho'. He has written screenplays for Disney, Paramount, Focus Features, and others. His other books include Reel Art and Bad Movies We Love, written with Edward Margulies, and he has written for GQ, Playboy, Movieline, Hollywood Life, Statement, More, and Cosmopolitan. Born in Massachusetts and a resident of Southern California, he is a contributing editor at Playboy.
"With great detail and heavy research, the book is as heady and colorful as the pulsating Pucci prints Susann so famously wore. It’s everything you could have ever possibly wanted to know about the book history loved to hate."
—Vogue

"Full of surprises and even suspense — revealing how cutthroat and puerile Hollywood can be. . . . A book to simply enjoy, especially after seeing the film, which I strongly recommend you do."
—The Washington Post

"Through extensive research and interviews, Rebello draws back the curtain on Susann's soapy saga, offering insight into the behind-the-scenes secrets in bringing the book to the big screen."
—The Hollywood Reporter

"Rebello is a skilled writer and shrewd observer of Hollywood. . . . If gossip is your doll, Rebello has the hookup."
—Los Angeles Times

"This book is light as a Maribou Teddy and I really recommend reading it in the tub."
—Rachel Syme, via Twitter

"Anyone seeking nonfiction escapism will be well served by Rebello’s loving dissection of a camp classic’s print and screen incarnations."
—Publishers Weekly

"A blissful treasure trove of gossipy insider details that Dolls fans will swiftly devour. . . . Written with a cinematic excitement and giddiness bordering on satire, this is an indulgent treat for Dolls fans. . . . Memorable reading for die-hard devotees and those seeking to relive all the breathless histrionics."
—Kirkus Reviews

"Rebello packs tons of information into this loving look at a cultural and cult phenomenon, sprinkling gossipy bits among the stats. . . .  Indulge yourself. Fans will love! love! love!, and newcomers will enjoy the Hollywood insider aspect."
—Library Journal