From Lehman to Demonetization (Paperback) 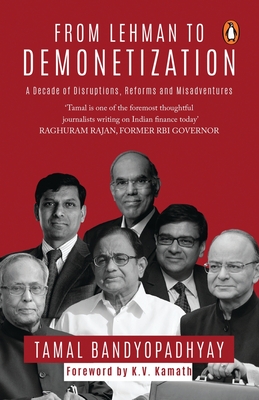 From Lehman to Demonetization (Paperback)

How did the Indian banking industry protect itself from the Lehman crash?

What nearly wiped out the MFI sector in India?

Why are public-sector banks suffering from a large pile of NPAs?

What is the conflict between the RBI and the finance ministry?

From Lehman to Demonetization is the epic story of banking in India in the last decade. The years from 2007 to 2017 were the most tumultuous and exciting time for this sector, which saw D. Subbarao, Raghuram Rajan and Urjit Patel as RBI governors working with finance ministers Pranab Mukherjee, P. Chidambaram and Arun Jaitley.
What a decade it has been-from India's first MFI, SKS Microfinance, entering the capital market to the near death of the industry; the RBI giving the nod to twenty-three banks and becoming an inflation targeter; from 9 per cent economic growth for three consecutive years to the jolt of demonetization.
Featuring essays and interviews with the who's who of this sector, including Deepak Parekh, K.V. Kamath, Arundhati Bhattacharya, Chanda Kochchar, Aditya Puri, Shikha Sharma, Raghuram Rajan, U.K. Sinha and Viral Acharya, this book makes for a riveting read.
If you had to read one book on banking in India, let this be it!

Tamal Bandyopadhyay, consulting editor at Business Standard and senior adviser at Jana Small Finance Bank, is an award-winning journalist and author. One of the most respected business journalists in India, he has kept a close watch on the financial sector for two and a half decades and has had a ringside view of the enormous changes in the Indian finance and banking sectors. His other books-A Bank for the Buck, Sahara: The Untold Story, Bandhan: The Making of a Bank, HDFC 2.0: From Dawn to Digital and Pandemonium: The Great Indian Banking Tragedy-have all been non-fiction bestsellers.