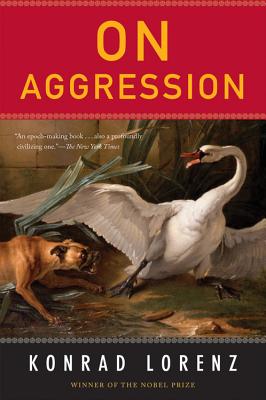 
Not On Our Shelves—Ships in 1-5 Days
This work has had significant impact on the social and biological sciences and is now a classic point of reference for investigations of behavioral patterns. Lorenz presents his findings on the mechanism of aggression and how animals control destructive drives in the interest of the species. Translated by Marjorie Kerr Wilson. A Helen and Kurt Wolff Book

Konrad Lorenz (1903-1989), Austrian zoologist, played a leading part in the foundation of ethology, the study of animal behavior. Most of his work was done at the Max Planck Institute of Behavioral Psychology, in Seewiesen, Bavaria. Lorenz studied greylag geese and jackdaws in particular, and rediscovered the principle of imprinting (originally described by Douglas Spalding in the nineteenth century). In 1973, he was awarded the Nobel Prize in Physiology or Medicine, sharing it with two other important ethologists, Niko Tinbergen and Karl von Frisch. His books for lay readers include "King Solomon's Ring", "Man Meets Dog", "Behind the Mirror", "Civilized Man's Eight Deadly Sins", and "The Year of the Greylag Goose".