Weavers, Scribes, and Kings: A New History of the Ancient Near East (Hardcover) 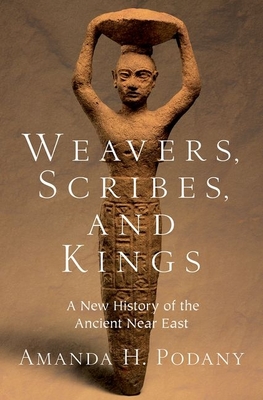 Weavers, Scribes, and Kings: A New History of the Ancient Near East (Hardcover)


Not On Our Shelves—Ships in 1-5 Days
A unique history of the ancient Near East that compellingly presents the life stories of kings, priestesses, merchants, bricklayers, and others In this sweeping history of the ancient Near East, Amanda Podany takes readers on a gripping journey from the creation of the world's first cities to the conquests of Alexander the Great. The book is built around the life stories of many ancient men and women, from kings, priestesses, and merchants to brickmakers, musicians, and weavers. Their habits of daily life, beliefs, triumphs, and crises, and the changes that people faced over time are explored through their own written words and the buildings, cities, and empires in which they lived. Rather than chronicling three thousand years of rulers and states, Weavers, Scribes, and Kings instead creates a tapestry of life stories through which readers will come to know specific individuals from many walks of life, and to understand their places within the broad history of events and institutions in the ancient Near East. These life stories are preserved on ancient clay tablets, which allow us to trace, for example, the career of a weaver as she advanced to become a supervisor of a workshop, listen to a king trying to persuade his generals to prepare for a siege, and feel the pain of a starving young couple and their four young children as they suffered through a time of famine. What might seem at first glance to be a remote and inaccessible ancient culture proves to be a comprehensible world, one that bequeathed to the modern world many of our institutions and beliefs, a truly fascinating place to visit.

Amanda H. Podany is Professor Emeritus of History at California State Polytechnic University, Pomona and the author of Brotherhood of Kings: How International Relations Shaped the Ancient Near East and The Ancient Near East: A Very Short Introduction. She is also the author and instructor of an audio and video lecture series for Wondrium called Ancient Mesopotamia: Life in the Cradle of Civilization.