Prophets Without Honor: The 2000 Camp David Summit and the End of the Two-State Solution (Hardcover) 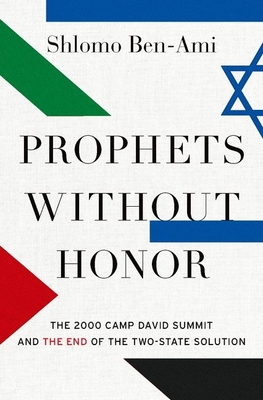 Prophets Without Honor: The 2000 Camp David Summit and the End of the Two-State Solution (Hardcover)


On Our Shelves Now at:
A high-level insider's history of the efforts to resolve the Israeli-Palestinian conflict, from 2000 Camp David Talks to the present, that explains why successive attempts have all failed. The clash between Israel and Palestine has been one of the most emotionally engaging causes of modern times. Prophets without Honor tells the story of the grueling attempts to solve the conflict and examines the reasons for its resilience. Shlomo Ben-Ami, who participated at a high level in the July
2000 Camp David peace talks that almost led to a historic deal, uses his insider experience to illuminate the specific factors that impede a solution to the conflict. He finds that the occupation's traits of permanence, Israel's insatiable quest for Lebensraum, and a hopelessly fragmented and
disoriented Palestinian national movement are to blame. Ben-Ami challenges the funereal historiography that emerged in the wake of the Camp David process, when--for the first time ever--Israelis and Palestinians engaged in the Sisyphean task of breaking the taboos surrounding the conflict. The Clinton Peace Parameters that emerged out of this process
eventually became the litmus test of every serious peace proposal in the future. But ill-conceived perceptions of the other party, all-or-nothing theological fanaticism, and a lack of bold and enlightened leadership have made these attempts at peace-making a defining failure of the two-state
concept. Ben-Ami scrutinizes the ominous alternatives to the two-state solution, such as the binational state, a unilateral pullout from much of the West Bank, and Donald Trump's Deal of the Century. He also examines the merits of a Jordanian-Palestinian solution. In discussing Palestine from a
comparative perspective, he underlines its singularity while also shedding light on the dilemmas that stand at the center of any peace enterprise. Ultimately, his account is the most non-partisan, comprehensive, and balanced written by an insider representing one of the parties.

Shlomo Ben-Ami is an Oxford-trained historian with a long academic career who later served as Israel's ambassador in Madrid and then as foreign minister in Ehud Barak's government. He participated in the July 2000 Camp David peace summit with President Clinton, Prime Minister Ehud Barak, andPalestinian leader Yasser Arafat. He subsequently led the Israeli negotiating team in all the phases of the peace process down to the last ditch attempt to save the peace at Taba in January 2001. Never before had Israelis and Palestinians been so close to reaching a peace accord. After leavingpolitics, Ben-Ami founded the Toledo Peace Centre in Spain. He is also the author of Scars of War, Wounds of Peace (Oxford).