In Praise of Litigation (Paperback) 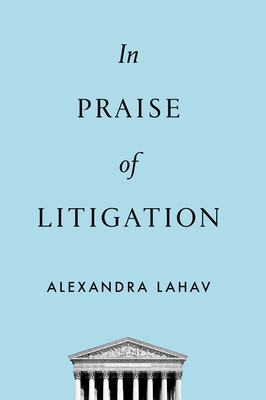 In Praise of Litigation (Paperback)


Not On Our Shelves—Ships in 1-5 Days
(This book cannot be returned.)
While the right to have one's day in court is a cherished feature of the American democratic system, alarms that the United States is hopelessly litigious and awash in frivolous claims have become ubiquitous. According to this view, litigation wastes precious resources, stifles innovation and
productivity, and corrodes our social fabric and the national character. Calls for reform have sought, often successfully, to limit people's access to the court system. Alexandra Lahav's In Praise of Litigation provides a much needed corrective to this flawed perspective, reminding us of the
irreplaceable role of litigation in a well-functioning democracy and debunking many of the myths that cloud our understanding of this role. Exploring cases involving freedom of speech, foodborne illness, defective cars, business competition, and more, the book shows that despite its inevitable
limitations, litigation empowers citizens to challenge the most powerful public and private interests and hold them accountable for their actions. In Praise of Litigation shows how our court system protects our liberties and enables civil society to flourish, and serves as a powerful reminder of why
we need to protect people's access to justice.

Alexandra D. Lahav teaches law at the University of Connecticut and has previously taught at Harvard, Yale, and Columbia law schools. Before becoming an academic she litigated civil rights cases in New York City.